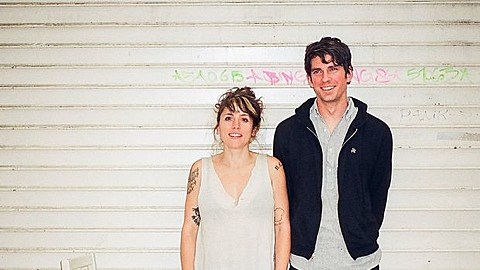 Des Ark are opening for Hop Along and Radiator Hospital at NYC's Bowery Ballroom on Saturday (12/12) (which is sold out), and after that they'll be playing more dates of their own. Two are with folk/post-rock collective Pygmy Lush, who haven't played live since before Death by Audio closed.

The first Des Ark/Pygmy Lush show is in NYC on Sunday (12/13) at Union Pool. Tickets are on sale now. Then they play a DC show on 12/16 with The City and I (members of Mannequin Pussy), who just played NYC last night (12/10). All dates are listed below.

Des Ark's latest album, Everything Dies, came out this past October on Graveface. It's a dark, rich-sounding album with folky songs, piano ballads, and contributions from Swans' Thor Harris and Engine Down's Jonathan Fuller. It's a little Feist-y too. Stream it below. Meanwhile, Pygmy Lush also have plans for a new album. They write:

We've also decided to finish up our writing here within the year and record a new record with our old friends at Robotic Empire. We are hoping to get into the studio with Kurt sometime early spring 2016. We have alot of new material and are very excited to get it recorded and start playing alot more shows! More news to come, as it greatly unravels!!!!!!!!

They say they'll start recording on April 20, 2016. List of tour dates and the Des Ark LP stream below...