photo: Desaparecidos at Webster Hall in 2013 (more by Tracy Allison) 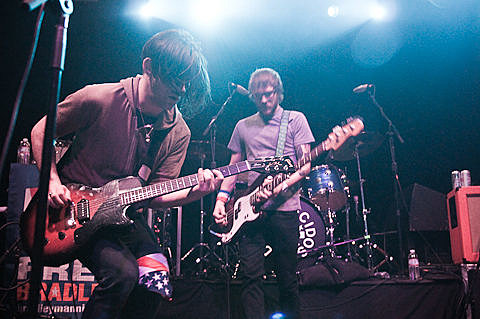 Conor Oberst reformed his punk band Desaparecidos back in 2012, and two new 7"s came not long after. Now they've announced that they'll release a new full length, the followup to their sole album -- 2002's Read Music/Speak Spanish on Saddle Creek -- and to release it they've signed to Epitaph, currently making them labelmates with Converge, Rancid, Joyce Manor, Pianos Become the Teeth and more. Stay tuned for more info on that.

Desaparecidos recently announced dates surrounding their Coachella performances, which include shows with Built to Spill, Brand New, Joyce Manor and Touche Amore. Since then, they were also announced for Forecastle Festival.

Conor also has international solo shows coming up with Felice Brothers and will be in NYC for Governors Ball. All dates are listed, with a stream of Desaparecidos' 2013 single, below...