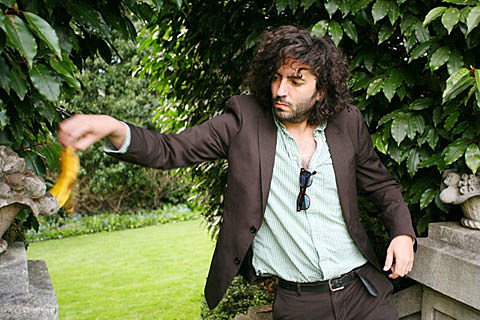 Welcome to the You Didn't Get Tickets to LCD Soundsystem edition of This Week in Indie. Or maybe some of you don't care about James Murphy's Last Hurrah, and if so you can consider this the I Don't Give a Crap About LCD Soundsystem edition of TWII. Luckily for everyone, this is another bonkers week for shows and there's bound to be something for everyone -- even if I don't write about it here.

Let's begin with what is my most-anticipated show of the weekend -- Destroyer, who play Webster Hall on Sunday (4/3).  (Tickets are still available.) I have friends who are Dan Bejar obsessives, but I've always been more of a casual fan. Destroyer's new album, Kaputt, is a masterpiece and easily my favorite of 2011 so far. Gone are the chintzy synths and thin production, replaced by glorious '80s widescreen pop that brings to mind (mine, at least) The Blue Nile and Prefab Sprout. It's got the scope and the arrangements I always imagine Bejar wanted for his songs but never had the means to make real.

It's also the first album I've loved in a long time that has this much saxophone on it. I don't think there's a song on Kaput without it, and it's of the variety that makes you think of a city in the rain. Maybe the saxophonist is playing in the rain on a fire escape somewhere? Or maybe that's just every music video from the '80s. Anyway, Kaputt is evocative of that era for sure but Bejar's unmistakable urbane style keeps it out of cheeseball territory.

For this tour, Bejar has assembled an "eight-piece Destroyer orchestra" to bring Kaputt to life on stage. My friend Toby (who does the blog The Finest Kiss) saw the show in Seattle and said, "Seeing Dan Bejar play with a small band or solo under the his Destroyer moniker was always good, but I had never been blown away. I knew I was going to hear the songs from his latest Kaputt, but I had no idea that what I would get would far exceed that very good record and as well as any expectations I had." That raises my expectations quite a bit, but it does make me more excited... even if the show is at Webster Hall. 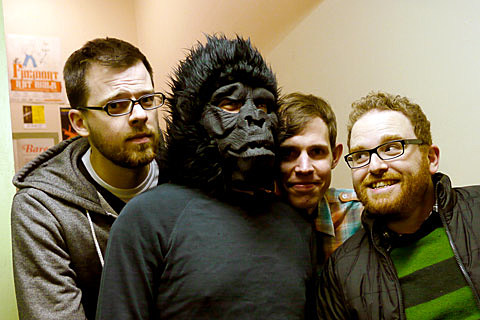 This weekend also marks the return of Seattle's BOAT, longtime TWII faves whose scrappy underdog status may be in jeopardy. Pitchfork, who has barely acknowledged their existence in the past, gave BOAT's great new album Dress Like Your Idols a 7.6 (besting the day's big review by about two points):

"BOAT's fourth album, then, finds the Crane-fronted four-piece going through something of an underachiever's quarter-life crisis. On one hand, Dress Like Your Idols sees Crane, drummer Jackson Long, bassist/guitarist Mark McKenzie, and multi-instrumentalist Josh Goodman finally making their way into a real studio for the first time. On the other hand, that studio-- Seattle's Two Sticks Audio-- is already defunct. And the songs, like the album cover, are as inspired by the band's youth as ever, merging Stephen Malkmus's obliquely deadpan twang, Tullycraft's sugary scene-skewering, and Modest Mouse's "reptile boy" yelp. Where some slightly younger slackers have been opting for warped 1980s synth-pop, BOAT continue to love the 90s: an era when they didn't know, as per the rueful title track, that "the job you wanted doesn't exist." The result is the best album yet from a band whose style finally appears to be back in vogue, though its sometimes-bitterly sardonic humor still won't be for everybody."

Now part of this may be that the '90s are indeed now fully in fashion again, but if DLYI is of slightly higher fidelity (none of their albums could be called low-fi), it's still what BOAT has done along -- make tuneful, smart, funny, occasionally anthemic indie rock. This time they're just wearing their influences on the cover of their album. Check out "Forever in Armitron" at the top of this post.

BOAT play The Rock Shop on Saturday (4/2) with Miniboone, Landlady and Creeping Weeds. This is the start of an East Coast tour that will have the band back in town next weekend for an early show at Mercury Lounge on Saturday, April 9 with Moon Taxi and The Human Hearts. 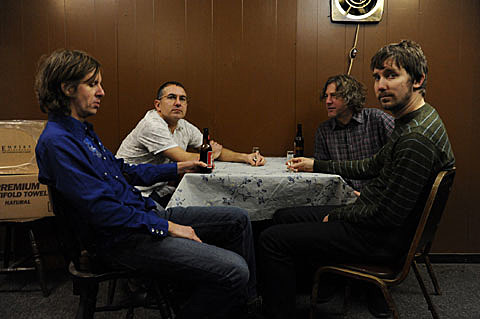 Also Saturday night (4/2) is the record release party for Obits' second album, Moody, Standard and Poor, which is happening at The Bell House. As a bunch of indie rock vets, Obits aren't so much set in their ways as they know what they like. You know what you're getting with an Obits album, but this new one has a little more breathing room than I Blame You, but rocks all the same. And anyone who's seen Obits play knows they bring it live, no muss no fuss.

Also playing the Bell House show are California's Tijuana Panthers who were last here in December. As I wrote then, these guys are pals with The Soft Pack and evoke a similar -- if less aggressive,  more party-oriented -- style of '60s surf rock. You can listen to the entirety of Tijuana Panthers' self-released debut, Max Baker, via a widget at the bottom of this post. Good stuff.  Tijuana Panthers also play Friday (4/1) at Pianos as part of a solid bill that includes the Sundelles (also playing Obits' show), Shark?, and Air Waves. That is an excellent Friday night option. 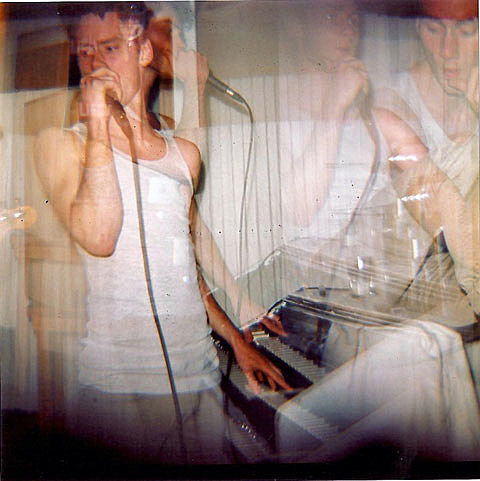 What else? As you may have heard, WU LYF are making their U.S. debut this weekend, playing tomorrow night at Glasslands (a show BV is presenting) which is sold out, and then Saturday (4/2) at Shea Stadium. To go to the Saturday show, you have to  RSVP. And once you get there, you have to pay $10. I don't know what to make of this Manchester band -- they are careful controllers of their image and we haven't heard much in the way of released music -- but I am intrigued. Says UK music mag The Fly:

Far from being arrogant or appearing above their audience, tonight the band seem lost in their own world, having left the window open for all to see. Roberts is an intense and unforgettable performer, but his bandmates back him with a sound that flits between sparkling and cavernous with a rhythm section pounding a self-affirmed beat destined for far bigger venues than this South London archway. Connected to his organ throughout, Roberts only separates himself from the instrument to sip from a teacup between songs. The cacophony of noise he and his band make is not ground-breakingly unique, a meeting point of Nick Cave and Wild Beasts as displayed on 'Spitting It Concrete Like The Golden Sun God' for example, however, the fire burning inside Wu Lyf, a light that only shines in the souls of a select few, is a truly special one off.

That's the bulk of this weekend's action. Actually that's not true, there's lots more but I hit most of the stuff I'm interested in. More picks, day-by-day, are below. 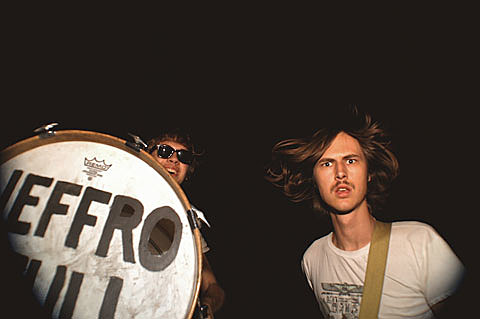 JEFF the Brotherhood are at Santos tonight. Their second album, We Are the Champions, is out sometime soon and features songs called "Ripper" and "Shredder" so you know it both rips and shreds. It does! JEFF rules and surely you've seen them by now and if you haven't...go to this show! And more reason to go: Screaming Females, Juiceboxxx and Teen Witch. They also play their NYC spiritual home, Death by Audio, on Saturday but I'm gonna guess that show will be sardine city...not for the squeamish!

PS I Love You and Diamond Rings are at Glasslands tonight which is also a highly recommended. It may seem like an odd pairing but both these artists love each other's music and you're gonna get their collaboration "Leftovers" for sure.

The fabulous Fleshtones play Maxwell's tonight. The world's finest purveyors of "super rock" and one of the most fun bands this city has every produced, The Fleshtones have a brand new album, Brooklyn Sound Solution, which is out now on Yep Roc. Check out "Bite of My Soul" at the top of this post. The CD comes with a bonus DVD of the band's feature-length documentary, Pardon Us for Living, But the Graveyard is Full, and you can watch the trailer for that below. 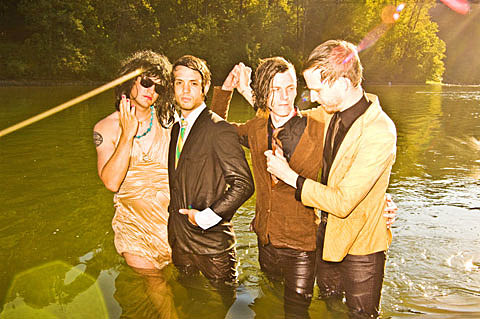 Portland band Starfucker (or STRFKR as their known in more conservative circles) play Bowery Ballroom with Norwegian faves (and Polyvinyl labelmates) Casiokids . I'm not crazy about the band's image, or thedumb name changes they went through, but I gotta admit Starfucker's new album, Reptillians, is pretty good. You can check out a track at the top of this post.

Dam Mantle didn't make it to the U.S. in time for SXSW thanks to visa issue that seemed to plauge just about every international band this year, but they have got all that sorted out now and will play Glasslands on Saturday, opening for compatriots in sound Gold Panda. If you dig that sort of sound -- glitchy with dashes of 8-bit -- you've probably heard their album, First Wave, already.  Sold out.

That's it for this week. Flyers, videos and tour dates follow. 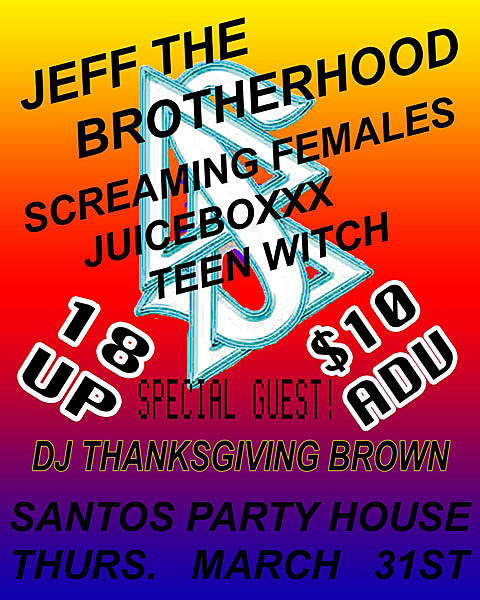 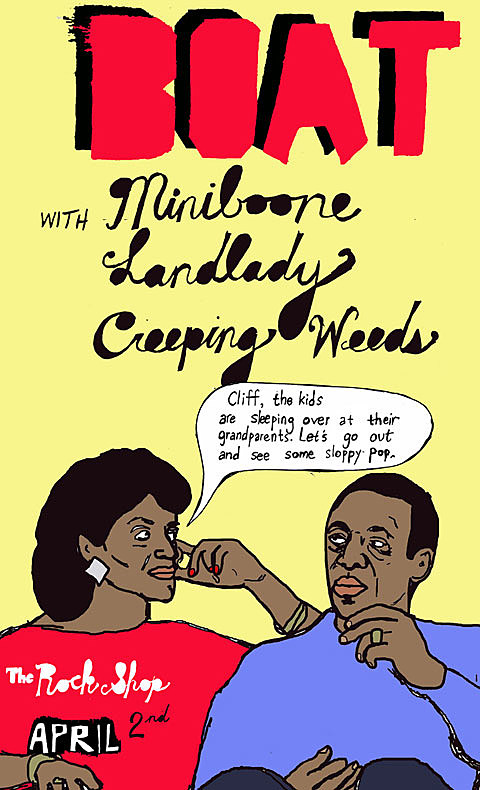 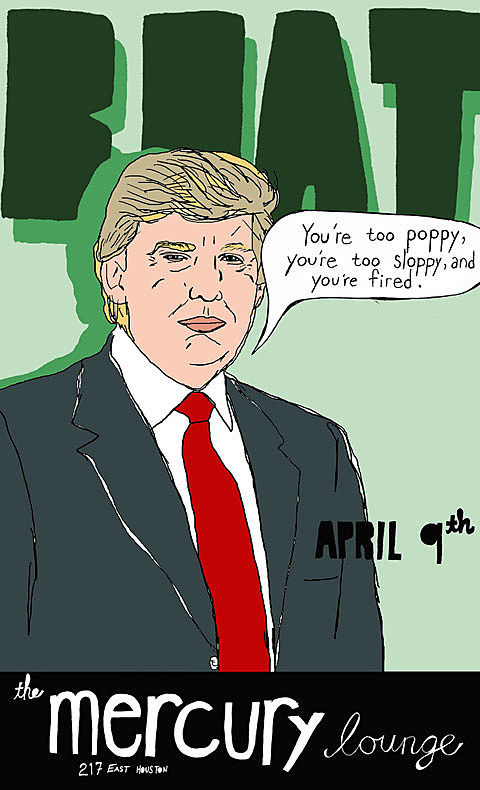 The Fleshtones - Pardon Us for Living, But the Graveyard is Full [Trailer]