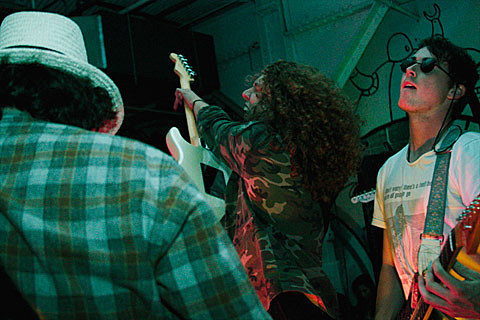 Destruction Unit are one of the best live bands around right now, and if my memory serves me right, I first thought this when I saw them on a bridge at SXSW about 30 seconds into "The World on Drugs," which is thankfully the first single off of their forthcoming full length, Deep Trip (due out 8/20 via Sacred Bones). Destruction Unit balance the punk and the psych pretty well at their shows and on their albums, but for all the noise and walls of sound this band can build, I tend to remember them for their full-on attack mode, which is crushing as can be in this song. Listen to it below while you look at Deep Trip's optical illusion cover art.

Destruction Unit also just announced a tour which brings them back to NYC on September 11 at Mercury Lounge. That show and a few others on the tour are with Ukiah Drag. DU's also killer Sacred Bones labelmate Pharmakon is on that Merc show too. Tickets for the Mercury Lounge show are not on sale yet, but you can keep checking TIcketmaster for updates.

All dates are listed, along with the new song, below...

Destruction Unit - "The World On Drugs"