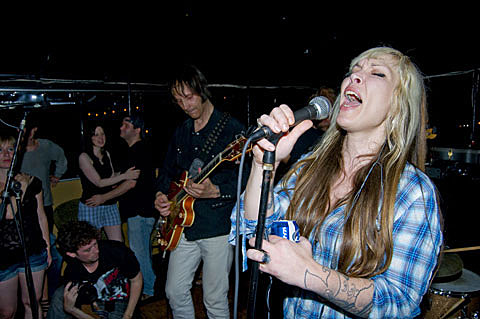 As mentioned in What's Going on Thursday?, the Detroit Cobras played Maxwell's in Hoboken, NJ last night (8/11) with The Booze. They'll do it again in Brooklyn tonight (8/12) at The Bell House with The Baxx Sisi's and Des Roar. Tickets are still available.

Frequent tour-mates and sometimes member sharers, Reigning Sound, have shows coming up too. We mentioned that they play the Norton Records Anniversary shows at The Bell House in November, though the night they play, night 2, with Jackie and the Cedrics, is now sold out. Luckily both of those bands will appear at pre-fest show on November 9 at Maxwell's Tickets are on sale.

Night 4 of the fest, when The Sonics headline, is also sold out, though tickets are still available for nights 1 and 3, and for the show The Sonics play at Maxwell's on November 12.