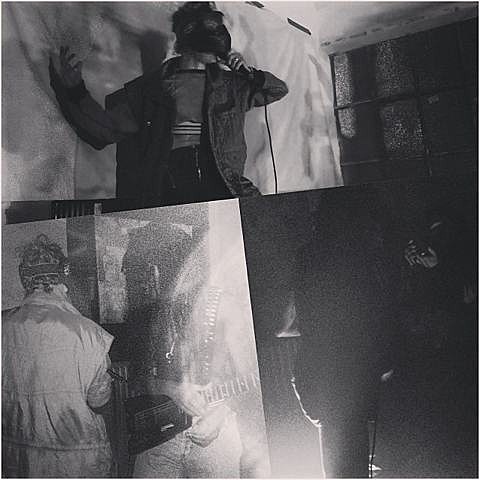 Dev Hynes has had a lot going on in the past eight weeks. He released Cupid Deluxe to widespread acclaim, lost his apartment in a fire, featured a plethora of year-end lists, received an outpouring of support through a fundraiser he knew nothing about, and then revived his old moniker, Lightspeed Champion, for a show at Cameo Gallery. It was within this context that he and girlfriend/collaborator Samantha Urbani performed a one-off Trans-Pecos show under the name Gayer on Monday night (12/30).

No one really knew what to expect from the concert. Much of the afternoon was spent checking the Facebook event, where promoter Jason Mandel answered any and all questions about what exactly was happening that night. He promised a live show with the duo "doing metal rap and other crazyness (sic)" and in the end, we were slightly surprised to find that the couple completely (and efficiently) fulfilled these expectations.

They opened with the metal portion, a chaotic, explosive track that found Dev playing an electronic (Casio?) guitar over swirls of pre-recorded drums while Samantha donned a gas mask and stood on the counter behind the stage, singing in slow streams of evil, low-pitched tones like some sort of alien about to swallow the audience. YU$$ provided mood-enhancing and much-needed visuals for the show, which, for the most part, are all people really can see in a no-stage DIY venue.

The rap came next, and we were more than a little surprised to realize that their selection was actually Eminem's recent six-minute single "Rap God." The mood changed suddenly. Samantha's mask came off and the duo stood front and center, exchanging verses and smiling at each other like a couple performing karaoke in their living room. It felt really good to see the two having this much fun, especially in the wake of everything that's happened. Video of "Rap God" is below. On his state-of-the-fundraiser Tumblr post, Dev suggested "Maybe it's time I down some anxiety medication see a doctor and try and play some shows," and this performance felt a lot like him just getting out there and having some fun.

The show concluded after "Rap God," which left a lot of people scratching their heads - wondering what exactly happened, if two songs was an acceptable length for a show, whether or not this performance was more or less interesting than what they expected, and perhaps even if they should be reconsidering their evaluation of Eminem's newest album.

As the couple packed up their gear, the house music kicked into a dance-tempo version of "Time Will Tell." The crowd reacted immediately, dancing along and belting the lyrics in unison to close out the night. It was very interesting to be singing along to a Blood Orange song at a Blood Orange show where no Blood Orange songs were played, and it was the perfect end to a show that flew in the face of order and expectation at every possible turn. In a way, it was a coherent performance that embraced the wonderful absurdity of our world and reminded us that concerts can be anything.

But it was also just a fun night that we all really needed.

Dev also snuck in one more show after that, playing Baby's All Right at the end of their New Year's Eve Show. Blood Orange will in full band mode for their sold-out Webster Hall on February 6.

Video of Dev and Sam doing "Rap God" at Trans Pecos, below...