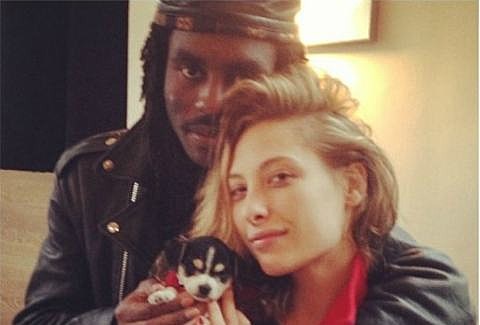 As you may know Blood Orange's Dev Hynes' East Village apartment burned down on Monday night and he lost everything in the devastating fire, including his dog, Cupid. He wrote about it on his Tumblr this morning:

I should explain first of all, exactly what has happened, in terms that maybe will make people understand. Imagine being outside of your home one day. Then somebody presses delete, on the last decade of your life. You own nothing except for what you have on you in that precise moment. This is what has happened. It's surreal and hard to wrap your head around, or imagine unless you've experienced it. The strangest part yet, Samantha & I were at a memorial when I found out.

It's more than music. As I've seen many people talk about, or people on the street. It's my life. It's everything I've ever owned....loved... It's all gone, forever. I miss you Cupid.

A fundraiser was set up by the mother of his girlfriend (and Friends singer) Samantha Urbani, which has raised nearly $25K in the last two days. Hynes, while appreciative, says he's wants to donate the money to charity:

This happens to so many people, people that don't have a girlfriend's place they can stay at. People who don't have a job they can do to try and help themselves money wise to attempt to get back on their feet. This is in my mind every second.

I truly have lost everything I own, hard to wrap your head around, but I have. Friends of mine have been more than kind to me, friends some people may not have, families in the same position would not be as fortunate... i'm aware of this.

If I am honest, the fundraiser makes me feel extremely uncomfortable. This isn't me saying I don't need the money, to reiterate, i have lost everything. But maybe it's time I down some anxiety medication see a doctor and try and play some shows y'know? There are things i can do, although it will take years, that can help myself rebuild, a huge part of me is still struggling with understanding the events of two nights ago, and where to take my life from here.

This isn't me being unappreciative. Tears stream down my face when Samantha shows me the nice messages people have written. It's overwhelming in the most extremely nicest way that people would care about this But as I stated before, so many people have nothing they can do to rebuild their life from scratch.

I have a lot to think about, I don't even know where to start from, I just wanted to be honest.

I want to give all the money to charity, 3 charities to be precise which I will explain further at a future point, that's how I feel, i'm being spoken to by people who are close and understand my situation and are trying to advise me. As I probably am still in shock, and may not have a choice but to accept some of the money, and then think about charities, I don't know... I don't know where my head is at right now...
But I had to say something.

He further adds, "please feel free to email me if you have donated and have any concerns, or would rather your money go to charity, or not. I want to hear people's thoughts. I'm not trying to make a news story, this is just my life, and I want to be genuine with the people that have been more than genuine with me." Read the whole post here.