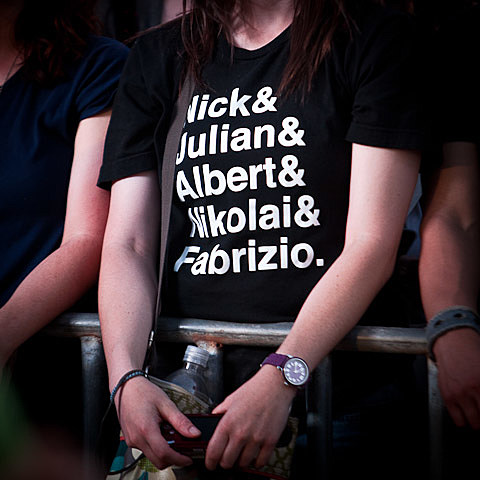 "The Strokes' guitarist Albert Hammond, Jr. has opened up about the drug rehab treatment he received while the band recorded their new album 'Angles'. Hammond Jr didn't name the specific type of drug he was being treated for, but called his ordeal "hardcore"..."I wasn't on any chemicals," he said. "It was hard - you have two good years of post-acute withdrawal. I was nervous and couldn't remember things. It's like having a stroke, no pun intended. You always do the crazy rock star thing, of course, but I'd rather be left with music from someone I admire than their funny stories of all the fucked-up shit they did." [NME]

Devendra Banhart & The Grogs were added at some point as an opener for the sold out Strokes show at Madison Square Garden happening this Friday night, April 1st (one night before LCD Soundsystem play the same venue).

Devendra is also featured in a new documentary called The Family Jams which documents his 2004 US tour with Joanna Newsom (who James Blake said he would not want to produce for) and Vetiver (In 2005 Devendra was quoted as saying that he preferred the term "The Family" to "freak folk"). The film will be screening at reRun in Brooklyn from April 8 through April 14. The film was directed by Brooklyn-based filmmaker and musician Kevin Barker, who has also performed with Devendra, Joanna, and Vetiver, among others. The film also features appearances and performances by Antony and the Johnsons, Espers, Meg Baird, The Pleased, and Linda Perhacs. Watch the trailer below.

The Strokes, who recently performed on SNL and Letterman, are continuing their late night television trend tonight on Jimmy Fallon (3/30).

Watch a video from the Letterman performance below...

--
The Strokes - "Taken For A Fool" [Late Show with David Letterman]