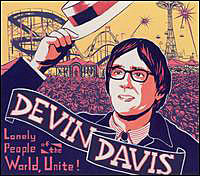 "Devin Davis sprang out of thin air it seemed, to deliver a one-man rallying cry for the lonely and for the redemptive joy of power pop. Offering up the one-man band/production team wonder, Lonely People of the World, Unite! (Mousse)." [sixeyes]

"This guy has an anthem, whether he knows it or not. Eleven anthems, in fact, thanks to some guy from Chi-town (via Florida) named Devin Davis who has single-handedly written, recorded, performed and produced a debut album --- Lonely People of the World, Unite! --- of almost unprecedented quality and depth of thought. Think Pinkerton without the pain, or Funeral if it was about loneliness instead of loss. Davis crams enough reckless enthusiasm, pop smarts, and shit-hot Bowie rock’n’roll into Unite’s 36 minute runtime to make Augie March look like a jam band." [cokemachineglow]

"Mop-topped and horn-rimmed, Chicago by-way-of Florida singer Devin Davis is ambitious, but it's not necessarily his nasty trombone or theremin chops that make his debut solo album better than your local mom-and-pop clerk's self-described "Bolan meets Pollard" pop masterpiece. Instead, it's his knowing way around a walloping chorus and his welcome sense of restraint and economy that allow said hooks to live for many hum-worthy listens." [Pitchfork]

More MP3s at his site. Album at Insound.

Devin is scheduled to play two CMJ shows. The 1st is at 12:15 (noon, not midnight) on Thurday 9/15 at the CMJ day stage (awake badge holders only) and the 2nd is that night at CB's Gallery at 9:15 (during Arcade Fire @ Summerstage). More tour dates on his site.