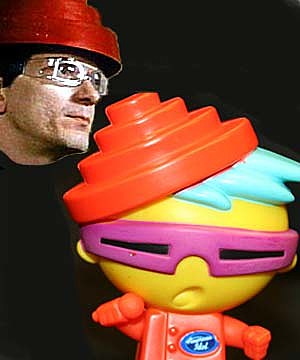 Post-punk pioneers Devo say they are suing McDonald's in the US over a Happy Meal doll that sports the band's signature red flower pot hat.

In April the fast food chain released a series of American Idol Happy Meal toys in the US based on a range of music genres, including Disco Dave, Country Clay, Rockin' Riley and Soulful Selma.

The band also allege that the toy plays a "Devo-esque song". [stuff.co.nz]

Devo, Tom Tom Club and Dan Deacon are playing McCarren Pool in Brooklyn this Thursday June 26th (6:00PM Doors/ 6:30PM Show). Tickets are still on sale, or you can try to win one of FIVE PAIRS I have to give away.....

Thanks to Musebox for the contest.

I assume that means that Dan Deacon will go on sat 6:30 sharp.