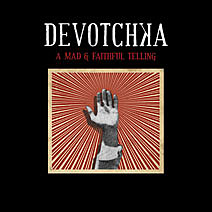 A Mad and Faithful Telling is the name of DeVotchKa's new album - out March 18th on ANTI. A presale started today for many of the following tour dates....

group will be joined by the Tosca Strings and kick off KEXP's live broadcast from the event in addition to performances for Anti-, Billions, Filter Magazine, Minneapolis' KCMP, and Austin's KUT radio stations.