this is where the DFA anniversary is happening 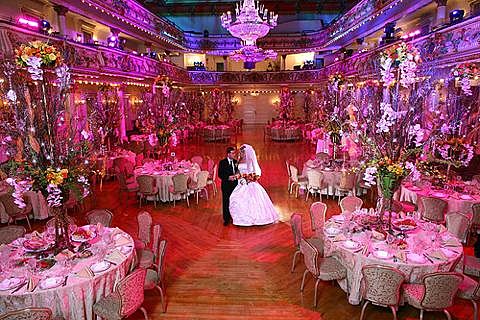 NYCers might be familiar with the infamous commercials for the spectacular Grand Prospect Hall in Brooklyn, with the proprieters finishing off the commercial by yelling "WE MAKE YOUR DREAMS COME TRUE" at the top of their lungs. I've always thought that the venue -- which is truly fantastic in the textbook definition of the word -- might make an interesting space for a musical event. It has before, including being the home of the world-music oriented Golden Fest.

Apparently I was not alone. We've mentioned it, but never fully given it the attention it deserves. As part of the massive Red Bull Music Academy takeover of NYC next month, DFA Records will make their dreams come true by hosting their 12th anniversary of party at the dazzling space on May 25, featuring a veritable army of the DFA crew including DJs and live sets from James Murphy, The Rapture, Black Dice (live set), Juan Maclean, Pat Mahoney, The Crystal Ark (live set), YACHT (live set), Sh*t Robot (live set), Planningtorock (live set), Prinzhorn Dance School (live set, their US debut), Still Going, Nancy Whang, Tim Sweeney, Larry Gus, Dan Bodan and Marcus Marr. There are bound to be some surprises in store as well and seems likely to be a very memorable night.

Tickets are still available, but reportedly "dangerously close to selling out."

DFA-related videos and those classic Grand Prospect Hall commercials are below.