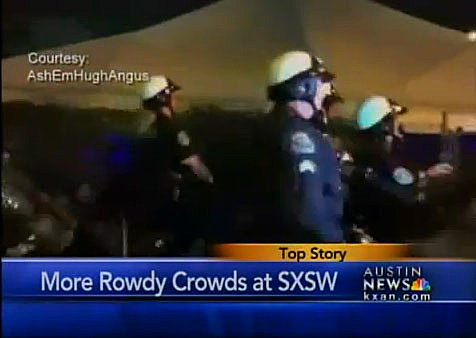 Death From Above 1979 did in fact play a 1am SXSW show on Saturday night, and it happened at Beauty Bar. Things got a little chaotic though thanks to the venue being small and there being an alley in the back where people could watch/listen from behind a fence. According to one attendant...

"The show began on a good vibe: fans were excited and dancing on both sides of the fence. I was standing by the front barricade watching the band and was only aware there was a problem when bassist Jesse F. Keeler addressed the crowd: "Hey guys, if you break down the fence, they're going to have to stop the show. Please don't break down the fence. It's not a sound barrier."

One song later, the fence was down. Only a few people rushed in. Many just stood still, watching as security took charge. When the band was informed, Keeler's band mate Sebastien Grainger told the crowd: "Alright, they're going to try and shut this s--- down, but we're going to keep on playing. How you guys doing? Welcome, welcome to the party.""