Diamond Head in the early 80s 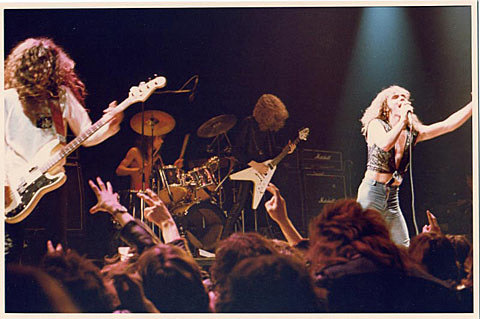 It is an undisputed fact that one of the key players in the New Wave Of British Heavy Metal movement of the late 70s was the UK's Diamond Head. And though the reactivated band may only have original member Brian Tatler (lead guitar/backing vox) amongst their ranks, you can still see the band bash through Diamond Head classics like "Am I Evil?" (most famously covered by Metallica) while on their current US tour. Catch Diamond Head on tour now and in NYC at BB King's on September 1st with Shitkill & Livesay, tickets are on sale. All dates are below.

In semi-related news, Metallica & Lou Reed have given a name to their forthcoming abomination? LP: Lulu (out November 1 in North America, October 31 everywhere else):

"Lulu" was inspired by German expressionist writer Frank Wededkind's plays "Earth Spirit" and "Pandora's Box," which tell a story of a young abused dancer's life and relationships and are now collectively known as the "Lulu Plays." Since their publication in the early 1900's, the plays have been the inspiration for a silent film ("Pandora's Box," 1929), an opera, and countless other creative endeavors. Originally the lyrics and musical landscape were sketched out by Lou for a theatrical production in Berlin, but after coming together with the 'Tallica boys for the Rock and Roll Hall of Fame concerts in New York in 2009 all guilty parties knew they wanted to make more music together. Lou was inspired enough by that performance to recently ask the band to join him in taking his theatrical "Lulu" piece to the next level and so starting in early May of this year we were all camped out recording at HQ studios in Northern California, bringing us to today and ten complete songs.

Metallica are scheduled to play Yankee Stadium on 9/14 with Slayer, Megadeth & Anthrax; tickets are still available.

In other news, Anthrax play a "secret show" at Best Buy Theater on September 12th as "cover band Satan's Lounge Act" according to a report from Blabbermouth. The show is the day before their latest LP (and first with original singer Joey Belladonna since the early 90s) Worship Music drops and you can get your free ticket by pre-ordering a copy of their new CD via Best Buy.

And lastly in an also semi-related but nowhere-near-as-classic note, Anvil just played Bowery Ballroom on 7/30, but will return to NYC and hit Highline Ballroom on Nov 7th with Shitkill. Tickets go on sale 8/23 at noon. Meanwhile you can catch Anvil on August 26th in Buffalo with Alice Cooper. Their other dates include a European tour with Saxon, and Maryland Deathfest 2012.