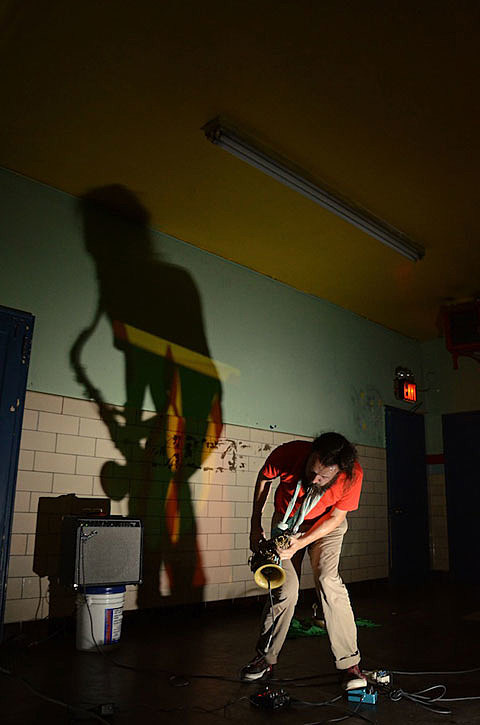 Diamond Terrifier (aka Sam Hilmer of Zs) is introducing his new bi-weekly series, 'PRACTICE!' taking place at Zebulon every other Tuesday. This month it takes place on January 17 and 31, and he's performing at and curating each one. The 1/17 show includes Lichens, Hunter Hunt-Hendrix (of Liturgy who are opening for Zola Jesus at Webster Hall), LZA/Dutch E. Germ (of Gang Gang Dance), and DJ sets by Laurel Halo and The Oracle. The 1/31 show includes Dan Friel< GDFX, Rat Attack, and DJ sets by Chief Boima (of Dutty Artz) and The Oracle. All shows in this series are free.

Diamond Terrifier also has a bunch of other shows coming up in NYC this month, including one TONIGHT (1/10) at Spectacle Theater in Brooklyn, where he will perform a live score for the film Shaman of the Blind Country, narrated by William S. Burroughs. He also plays Shea Stadium on Saturday (1/14) with Controlled Bleeding and Dan Friel, and Littlefield on January 18 with Patrick Higgins and Eric Wubbles (tickets). The next night he'll be in Brooklyn again at La Sala (1/19) with Extra Life, and Union Pool on January 24 with Dan Friel, Zulus and Grooms.

Diamond Terrifier is also set to release his first official full length this September via Northern Spy. The album will be produced by Chris Taylor of Grizzly Bear. Until then, he's been releasing a single every month on his website. Check out this month's installment, a live recording of "It's Already After The End Of The World" from Freedom Garden in October, below, and download it above.

All dates and the stream below...