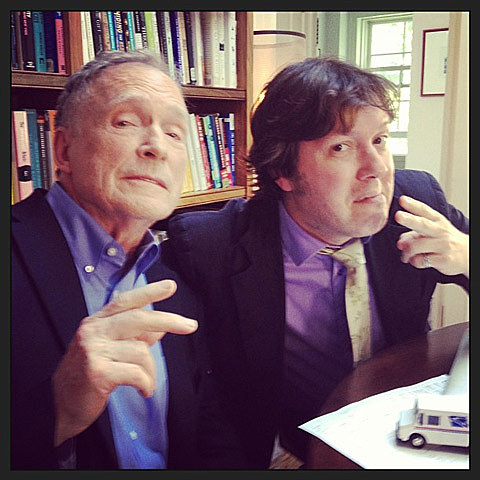 You may know Dave Hill from his stand up, his band, or his book, or from sometimes shirtless concert reviews on this website. Today, however, Dave takes on another role -- "Vice President of Fulfillment" at Amazon.com. In case you haven't been following the dispute between Amazon and the French publishing group Hachette, this new video should shed some humorous light on the issue. The video features author Malcolm Gladwell (Outliers, Blink), who has been personally affected by the dispute, and legendary talk show host Dick Cavett. This isn't the first time Dave and Dick have gotten together, either.

If that's not enough Dave Hill for you, you can catch him live, like at "Choice Cuts" which happens at Brooklyn's Littlefield on July 31 with Michelle Wolf, Colin Nissan, Mark Normand, Jen Kwok and more. (Ticktes). as part of , listen to his WFMU show, The Goddamn Dave Hill Show, or listen in on his newest stint on Pete Holmes' podcast, You Made It Weird.

Upcoming Dave Hill tour dates are listed, along with that video, below...