"Then, Doom's crew pulls up 15 people deep. Everybody comes out of the car except for Doom" - Harry Knuckles 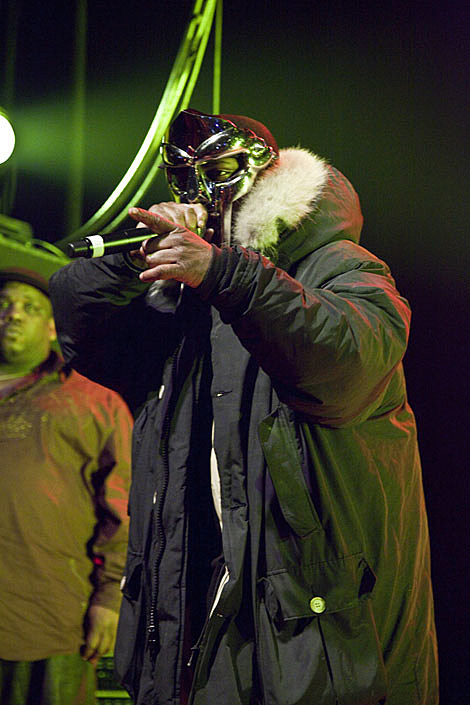 The three-date Mos Def/DOOM tour, coming to NYC's Nokia Theatre Times Square on Friday, February 26th, has already been rescheduled. With its new dates, the first show happened February 13th at Chicago's Congress Theater. Now it's being speculated that DOOM, as in the past, sent a stand-in to perform his super-short lip-synced headlining set. The venue and promoters have responded to the claim that it was a fake DOOM.

There are rumors floating around that this past Saturday's DOOM show was performed by a person who was not DOOM. The promoters of the show: React, Cold Grums, Silver Wrapper and the Congress Theater understand the rumors and are NOT ignoring the issue.

At the current time, React, Cold Grums, Silver Wrapper and the Congress Theater DO NOT have any proof that the person who performed was not Daniel Dumile, a.k.a. Doom. The show was legally contracted and paid for in full. The show was officially listed on Doom's website. React, Cold Grums and Silver Wrapper are all independent promoters who pour their lives into our shows.

Circumstances beyond the promoter's and venue's control prevented the artists from arriving on time, and the promoters elected to keep the venue open late so that the show could go on.

React, Cold Grums, Silver Wrapper and the Congress Theater are conducting an investigation with the Talent Agency, Management and Legal representatives for Doom. Because the show was legally contracted and paid for in full, any breach of contract could result in serious legal action. Doom's representatives are also preparing a statement.

Regardless of any of opinions, compelling proof of the matter is needed to take legal action on it. Until the investigation reaches conclusion, and proof is in hand, the promoters will not issue any refunds. At the current time, it is a rumor. This issue is being treated with the utmost respect and consideration.

React, Cold Grums, Silver Wrapper and the Congress Theater will release a statement clarifying the results in the near future. [Chicago Now]

What that means for the show this Friday is anybody's guess. Tickets are still on sale if you want to find out in person.

Promoter Harry Knuckles from Cold Grums, who was aware of DOOM's spotty record beforehand, describes the situation from his point of view, below. Mos Def (who may or may not have been drinking a Rolling Rock at Under 100) (via) did manage to put in what looks like a solid performance (including a masked cover of DOOM's "Accordian"). And on top of that, DOOM has added more European dates to his schedule for this March. The statement, videos and tour dates are below...

[E]ven now we can't prove that wasn't Daniel Dumile. Here's how shit went down that night. it was an all-in deal so they booked all their own flights and hotel and ground trans. Doom sent his dj to do soundcheck, just line checks, so it's understandable and common that the prima-donna (sp?) headliners don't bother to check themselves. Like Mos, he was maaaad late to his set times and from what I hear from the agent, he is just super secretive and anti-social. So we're thinking "ok, Mos is here, and this is just part of Doom's mystique" Then, Doom's crew pulls up 15 people deep. Everybody comes out of the car except for Doom. Again, according to the agent, this is typical Doom. Then just as his set is supposed to start, dood jumps out of the car, runs in behind his huge hypeman, grabs a mic and runs on stage. At no point did we have time to fingerprint him or draw blood for inspection. And IMO, seriously, the dood looked like him, like Zev Love X. yes it was pretty obvious that the guy was lip-syncing, but we can't say that it wasn't Dumile. If Dumile lip-syncs because he is too fat, alcoholic and out of breath to spit his own verse, I guess that's what it has come to now. [Chicago Reader] 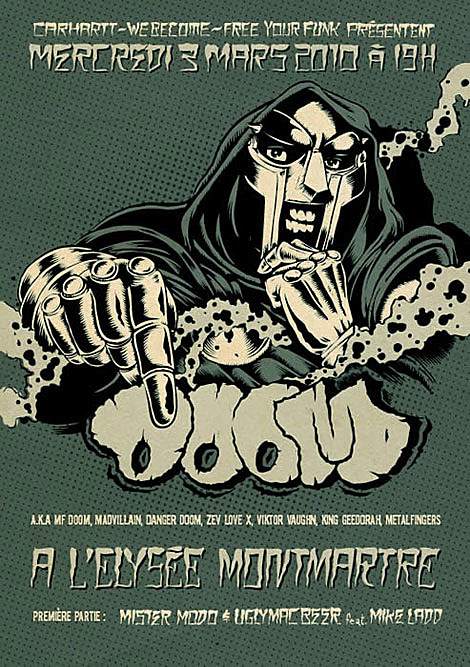