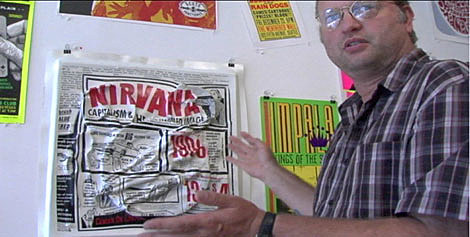 Died Young, Stayed Pretty's NYC premiere is tonight (July 17th) at IFC Center, where it runs into the week. The 9:35pm screening will be "followed by a discussion with filmmaker Eileen Yaghoobian and design gurus Julie Lasky and Robert Newman." Yaghoobian will be doing Q&As at the film's 9:35pm showings through Wednesday, July 22nd.

For the premiere, there's an afterparty/concert at 92YTribeca with the classic-rock-styled BM Linx and Iranian rock band Hypernova.

While rock-show posters may not seem like the most engaging subject for a feature length film, the trailer really sells the idea of their weird, isolated subculture well. Check it out, with the schedule for showings in other cities, below...