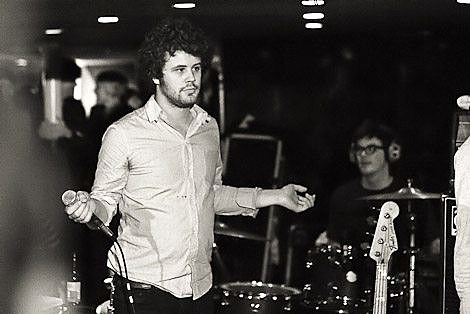 Not quite on the scale of their last NYC music event (that I know about), but Diesel Jeans's U:Music tour will visit NYC for a show at Webster Hall on Thursday, July 30th. The lineup for that includes The Roots (with a special guest), Drake, Cobra Starship (huh?), Passion Pit, Theophilus London, and contest winners (two bands won a contest to get on the bill) The Terror Pigeon Dance Revolt! (as seen HERE and HERE) and Heartsrevolution. "To get in, one has to appear at the store's participating NYC locations wearing a pair of Diesel jeans, though tickets are limited."

All Diesel fans will have a chance to witness this private event with a limited amount of invitations to be given away at participating Diesel stores. One must show up to participating stores in a pair of Diesel jeans to qualify...

The rest of the info below...

In addition to the concert, the company's 5th Avenue store will hosting a series of live performances and programs throughout the week. Details on those below...

Starting July 20th through July 25th the window of the 5th Avenue Planet store will turn into a living radio station. The west-facing window looks out onto 5th Avenue and measures 18 feet by 8 feet. Over 50 shows will take place live in the window from 10am to 9pm.

Special technology will be applied to the window in which consumers will be able to listen to the recording while viewing the station from outside. Station hours are from 10am to 9pm, each of the six days. Daily schedule and guest bios to post each and every day on www.dieselumusic.com.

There's more....inside the store, a special platform will be built one-story high (12 feet high) where over 10 live performances will happen throughout the week (two per day). Admission is free and guests can enjoy the line-up live on the second and third floors. With the location of Diesel on 54th and 5th Avenue, one will be able to witness the performance while strolling down 5th. Over 40,000 people stroll the avenue every day.

Diesel:U:Music winners HEARTSREVOLUTION and The Terror Pigeon Dance Revolt! are now touring the world from July to December across the world's greatest cities - including Berlin, Paris, Madrid, London, Tokyo and New York - to promote their music alongside established local music names. The concerts will broadcast to millions online.

SoCo is also throwing a free show at Webster Hall.