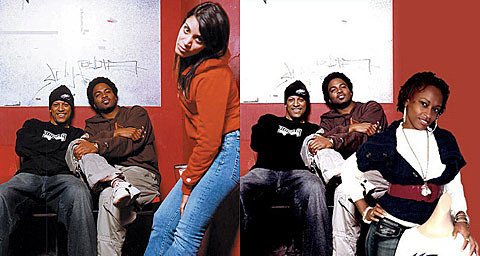 Earlier this month, news began circulating that Digable Planets had plans to reunite with their original members in 2012 for a tour and a new album, which would be the followup to 1994's Blowout Comb. However, the group's original female emcee, Ladybug Mecca, has since denied those claims, stating that, "Though a dialog has started about possible plans in the future, nothing has been contracted yet. All reports of Digable Planets, and/or Ladybug Mecca's appearance with them, are false and inaccurate."

However, the group will be playing a show in Brooklyn this Tuesday (12/20) at Brooklyn Bowl with F. Stokes and UGO Crew. Tickets are still available. Digable Planets will be backed by the band The Cosmic Funk Orchestra, like they have been at past shows.

They originally reunited in 2005, and went through a series of reunion tours in the years following, scheduling-then-cancelling-dates with Ladybug and without. In the past Ladybug's role has been filled by MC Madarocka (aka Lady Makka). We contacted the group's agent for more info. He (slightly contradicted Ladybug and) said, "Though Ladybug is not yet slated rejoin her former band mates until 2012, you never know who will show up to a Digable show - constantly reminding listeners why Digable Planets are "Cool like dat"." Hmmm.

Ish aka Butterfly (Ishmael Butler) has recently been spending his time with Shabazz Palaces, who released one of Rough Trade's favorite albums of the year.

Check out some classic Digable Planets video below.