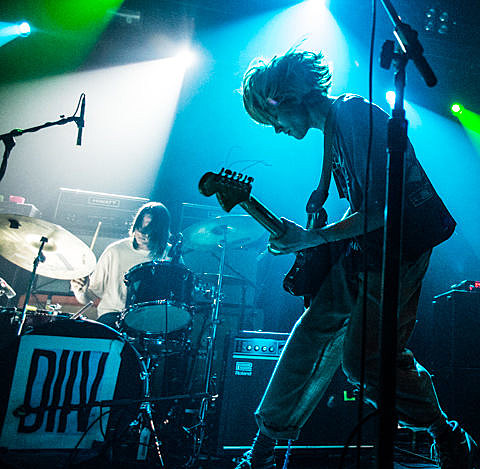 Brooklyn's DIIV just played their last date with Japandroids last night (12/11) and have dropped off the remainder of the dates (there were only three left) and will now play Late Night with David Letterman on Thursday (12/13).

The band also have announced two NYC shows, both happening at Brooklyn Bowl on January 13. The first show is a matinee (11 AM doors, show at 11:30) which is being presented by KidRockers and will be opened by DIIV's Captured Tracks labelmates Widowspeak, and hosted by Seth Herzog and Craig Baldo. The show is all ages until 6 PM and children under 2 get in for free. Everyone above the age of 2 will have to buy tickets. But then at 6 PM doors open for a second DIIV show which is free with RSVP but 21+, and Widowspeak isn't on that one.

As mentioned, Widowspeak will release their new album, Almanac, on January 22 via Captured Tracks. The band have just revealed another cut from that album, "The Dark Age," which you can stream below. Widowspeak have other upcoming local shows including the Sandy benefit at Saint VItus on Friday (12/14) with The Men, Lust For Youth, Waxahatchee and DJs Calen Braaten (Sacred Bones) and Jenn Pelly (tickets). Widowspeak will also be touring a bit in support of Almanac on a run which includes another hometown show happening on January 22 at Mercury Lounge (tickets).

Song stream and all lists of dates are below...