DIIV at Austin's Red 7 in April (more by Tim Griffin) 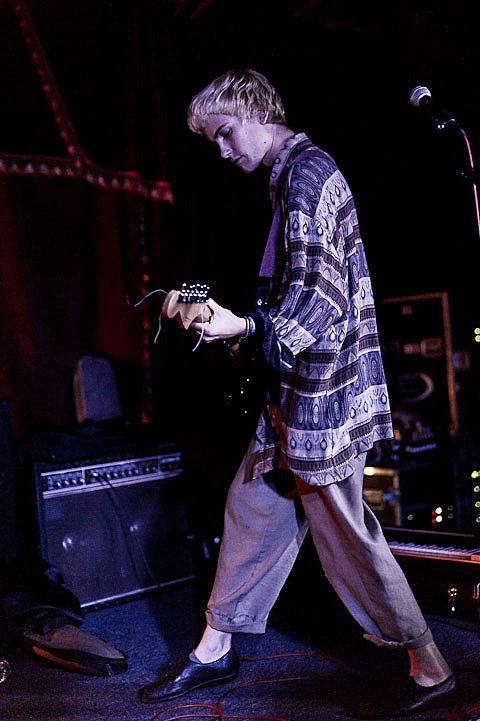 DIIV are about to hook up with Unknown Mortal Orchestra and Doldrums on their tour which kicks off this week. DIIV won't be at either of UMO's NYC shows (6/7 at Mercury Lounge and 6/8 at Glasslands) but they'll be playing their own NYC show on Friday (6/8) at 285 Kent with Captured Tracks labelmates Mac DeMarco and MINKS, along with Life Size Maps, Crinkles, and Turnip King. Admission is $10 and there will be free pizza. (Nobody yell "food fight!" ok?) The flier for this show is below.

DIIV's debut full length, Oshin is due out June 26 via Captured Tracks. The band just spoke to John Norris for an interview with Interview Magazine about the album:

JOHN NORRIS: Guys, this is a band that only a year ago had just barely begun, right? And at the time you just had a handful of songs?

SMITH: [Our first show was in the] end of July. It's funny, when I was first writing songs for this record, all the song titles would be just like the date, and then a short word describing it. And I could probably look back and see that I recorded some song on the record like today, exactly one year ago. Basically I wrote all the songs, with a few exceptions, in May of last year.

NORRIS: In a very concentrated amount of time?

SMITH: Yeah, yeah, real concentrated. A couple of the songs that don't sound anything like each other, I wrote on the same day, within like 10 minutes of each other.

DIIV recently revealed a video for the track, "How Long Have You Known?," off that album, which you can watch below.

After the UMO tour, DIIV have a number of other dates scheduled, including a few more in NYC: their record release show in Brooklyn at Glasslands on June 21 with Forma, PC Worship, and VIncent Cacchione (DJ) (tickets), a short run with Best Coast, including the Terminal 5 show (7/17) (tickets), and the free River Rocks show with Grimes and Wild Nothing (8/9).

Meanwhile, Beach Fossils (who also count DIIV's Zachary Cole Smith as a member) have an upcoming NYC show opening for Jens Lekman and of Montreal in McCarren Park on June 15, the same day DIIV plays a NXNE show. Wonder what this means for Beach Fossil's lineup at the McCarren Park show.

A list of all dates and video and show flier below...

DIIV - "How Long Have You Known?" Official Video