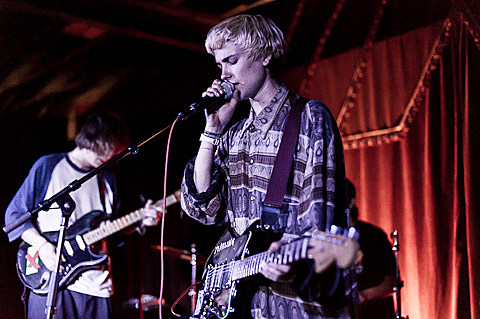 DIIV (formerly Dive, we'll stop saying it soon) dropped another new track from their upcoming debut Oshin, out June 26 on Captured Tracks. Like the rest of the album, "Doused" (that recently got "Best New Track" over at Pitchfork). was recorded with the full band (early singles were just Cole Smith) and definitely gives you a good idea of what they're like live these days -- dark, driving, ever-moving. You can stream it below.

DIIV, who are growing more popular by the second, aren't playing 17 shows a week anymore. The band wrapped up a tour with Frankie Rose recently at Mercury Lounge (and then snuck in a secret show at Glasslands much later the same night...3AM or so) but have otherwise left their summer mostly open. Your next chance to see them is at Brooklyn Bowl on May 24 as part of a Hype Machine-presented night that also features The High Highs, Killer Mike and Beat Culture. It's free with RSVP.

Otherwise, DIIV have two other scheduled NYC shows at this point: the June 23 record release party at Glasslands and August 9 River Rocks show with Grimes and Wild Nothing. They also have a few dates scheduled with Unknown Mortal Orchestra, who meanwhile play GoogaMooga this weekend. All tour dates are listed with the song stream below...