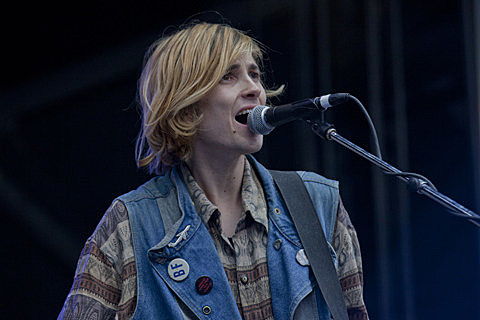 Zachary Cole Smith of DIIV and Sky Ferreira were arrested late Friday night in Saugerties, NY after a traffic stop. Smith was charged with two counts of criminal possession of a controlled substance, one count of possession of stolen property and one count of aggravated unlicensed driving, all of which are misdemeanors. Ferreira was charged with misdemeanors criminal possession of a controlled substance and resisting arrest. From The Daily Freeman's police blotter (via P4k):

Officers stopped a 1990 Ford pickup truck with New Jersey registration after the driver made several vehicle and traffic infractions, police said. Police said a registration check showed the license plates on the truck were stolen and the driver, Smith, was wanted by the Dutchess County Sheriff's Office on an outstanding vehicle and traffic warrant. While taking Smith into custody, officers found a plastic bag containing 42 decks of heroin, police said. Police said Ferreira, a passenger in the truck, was found in possession of Ecstasy and resisted arrest. Smith and Ferreira were arraigned in Saugerties Village Court and sent to the Ulster County Jail -- Smith in lieu of $2,500 bail and Ferreira in lieu of $1,500 bail.

Smith and Ferreira were out in time for DIIV to play Basilica Sound Scape on Saturday, where Ferreira joined the band to cover Cat Power's "Nude as the News" which you can watch a bit of below.