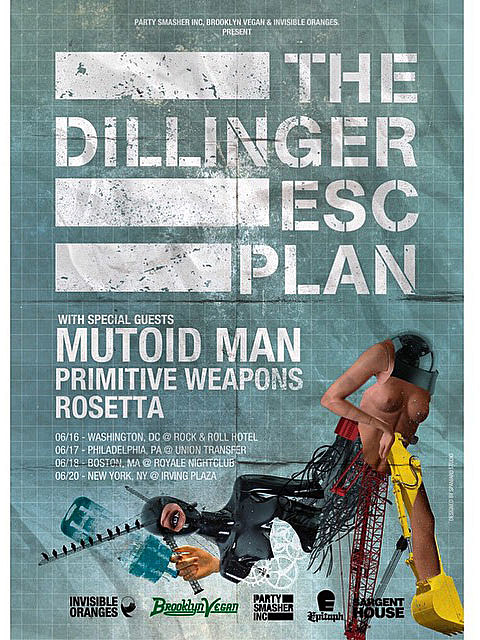 The Dillinger Escape Plan, who played their first show in eight months in Austin this past weekend as part of the Thrasher Deathmatch at SXSW, will be heading out on the road this summer for a short East Coast headlining club tour proudly co-presented by Party Smasher Inc, BrooklynVegan and Invisible Oranges. Mutoid Man and Primitive Weapons, who shared a bill at Saint Vitus earlier this month, will be along for the ride. Rosetta also plays the Philly show.

Tickets go on sale Friday (3/27) and here are the dates and ticket links:

Your first chance to get tickets for these shows will be via the BV/IO presale which starts Tuesday (3/24) at 10 AM. Check back Tuesday morning for the password.

DEP's full itinerary also includes some festivals. All tour dates are listed, with more about the Austin show, below... 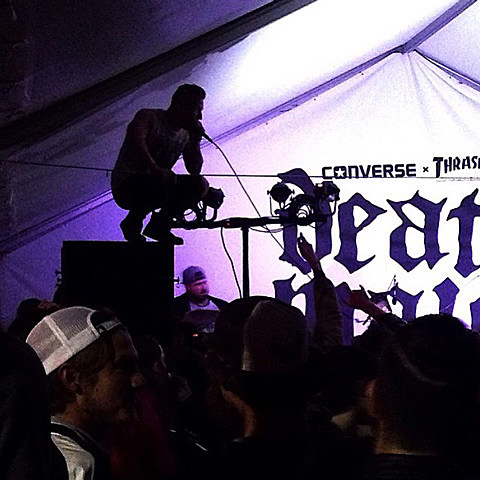 The perfect answer to that was the headlining event at the Gypsy Lounge, the annual Thrasher Death Match. After a super inspired set by New York City hardcore veterans Sick of It All, math metal juggernauts The Dillinger Escape Plan played their one and only show of the festival. Admittedly, the band is not for the faint of heart, as their show is one of pure, unadulterated chaos. But they are brilliant and unpredictable in every way possible. For the first, vocalist Greg Puciato and guitarist/founding member Ben Weinman are the definition of unhinged. Like Achilles in the movie Troy, you don't need to control them, only unleash them. There was practically no more than thirty seconds at any point in the set where they were stationary. Puciato spent as much time singing in or with the crowd as he did on stage, and climbed lightwalls and speakers jumping into the crowd from every possible vantage point. Weinman did spin kicks off speakers, flung his guitar in circles and at one point even played his parts on top of the crowd with Puciato doing the same. - [mxdwn]