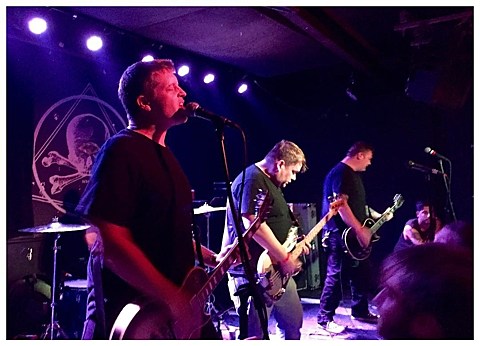 Dillinger Four don't play shows very often these days and they haven't played NYC in many years, but that finally changed over the weekend when their run of dates with Night Birds, Iron Chic (with the singer of Broadcaster filling in on guitar) and Big Eyes came to Brooklyn for sold-out shows on Saturday (10/10) at Music Hall of Williamsburg and Sunday (10/11) at Saint Vitus.

I caught the Vitus show, where Patrick Costello kept jokingly calling us "New Jersey" which he later said was because for their first four years as a band they were repeatedly denied shows in NYC and always playing Jersey instead. They also mentioned that a previous time they did play New York was at CBGB, where the venue's electrical setup caused the band's equipment to break after one song and then the CBs people wouldn't pay them. And the midwestern band took plenty of other jabs at Brooklyn, whether they were assuring their fellow midwesterners who moved out here that they'd eventually move back home, or condemning their drummer for picking the wrong city to drop his stick in: "This is Brooklyn, this is where TV on the Radio is from! We need to make it here! You can't be dropping your stick in Brooklyn."

Lack of love for our city notwithstanding, this show was a triumphant return and D4 wrecked. It was one of those Vitus nights where the whole place was packed and the crowd was a constantly moving, constantly fist-raising mob, even if it was only 10:30 on a Sunday (and not like, midnight or 2 AM). We got tons of old favorites like "O.K. F.M. D.O.A.," "Doublewhiskeycokenoice," "Noble Stabbings!!" and plenty more, and no matter what song they were playing the whole place was screaming. I don't think anyone there was having a bad time, and it looked like the D4 guys were enjoying themselves too. Try to come back another time this decade, you guys!

All three openers were great, but I saw the first two pretty recently and it was actually my first time catching Night Birds (who just dropped a new album), who seriously won me over. They're not the only modern band to hearken back to early '80s SoCal hardcore, but I can't think of too many who do it as well. They've got a frontman who looks like he's constantly on the verge of exploding, and their bassist and guitarist were never not looking pissed-off as all hell. Not to mention the guitarist is a razor-sharp downstrummer and the bass player's fingers were moving a mile a minute.

Check out some more pictures and video clips from the NYC shows, below...

I got to see my absolute favorite band #DillingerFour last night for the first time and they did not disappoint. #d4

Dillinger Four is a good band.