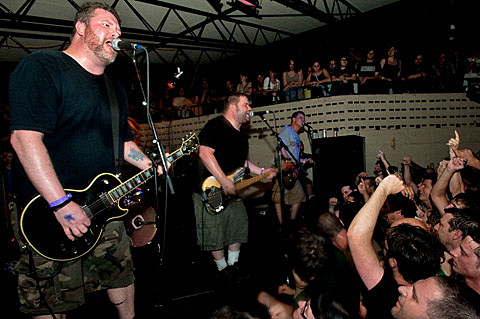 Melodic punk greats Dillinger Four are still active, but chances to see them are few and far between and they haven't played NYC in years. So if you're a D4 fan and also looking to get out of the city on July 4th weekend, this news may be of interest to you. Dillinger Four will celebrate their 21st anniversary with the D4'th of July: D4 Turns 21! festival on July Fourth at Minneapolis' Triple Rock Social Club, and it's a pretty stacked lineup. Against Me!, Scared of Chaka, Toys That Kill, Off With Their Heads, Tim Barry and more are on board for the fest, and "surprise special guests" are promised. Tickets go on sale today (5/4) at noon CDT.

Against Me! are also touring and playing a free NYC show during Northside Festival. Singer Laura Jane Grace will be here for a solo show too.

D4'th of July: D4 Turns 21! -- Lineup
Against Me!
Dillinger Four
Scared of Chaka
Toys That Kill
Off With Their Heads
Tim Barry
Pink Mink
Nato Coles and the Blue Diamond Band
United Teachers of Music
with surprise special guests