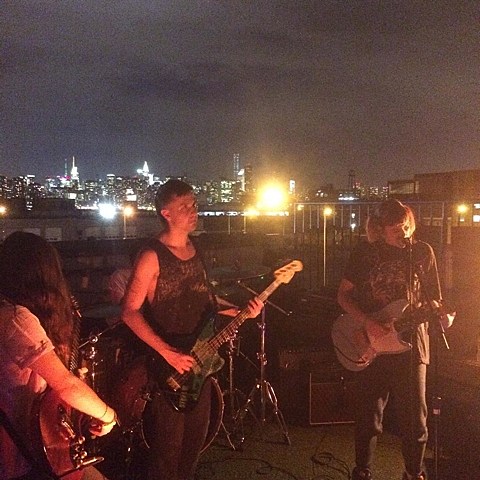 I kicked off my CMJ this year at the co-sign Rooftop Bash on the roof of Output last night (10/13), where one of the acts who won me over last year, Dilly Dally, were playing. Watching a band on a roof in nice 70-something degree weather, surrounded by drunk people at 8 PM on a Tuesday, and with the smell of fried food coming from somewhere, it felt more like a weeknight in Austin at SXSW than CMJ. (Because let's be honest, if you live in New York a weeknight at CMJ feels like "that one time of the year I go to Arlene's Grocery.") And Dilly Dally were great. They played most of their all-hits debut album Sore which came out last week on Partisan/Buzz, and did a gnarly grunge cover of fellow Toronto artist Drake's "Know Yourself" (during which Katie pointed at her bandmates when she yelled "RUNNIN! THRU THE! SIX! WITH MY! WOES!").

There's are other chances to catch Dilly Dally while they're in NYC, including tonight (10/14) at Santos Party House for the NME, PopGun, House Arrest CMJ Party with Protomartyr, Downtown Boys, Shopping, Yung, Nico Yaryan, Car Seat Headrest, Seratones, Hooton Tennis Club and YAK. They play at 1 AM and tickets are still available. They also play the FADER Fort on Saturday (10/17) at Converse Rubber Tracks with YG, Baauer, Porches and more. They're on at 9:30 PM at that one, but before that they also play the BrooklynVegan Saturday party at Baby's All Right at 4 PM (stay tuned for the full lineup - UPDATE: HERE IT IS).

Their tour also returns to NYC on November 14 at Baby's All Right (tickets) an dNovember 16 at Mercury Lounge (tickets).