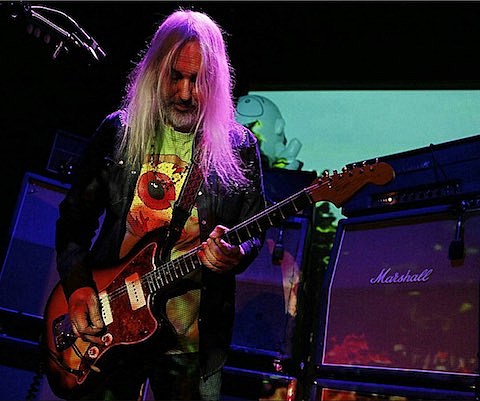 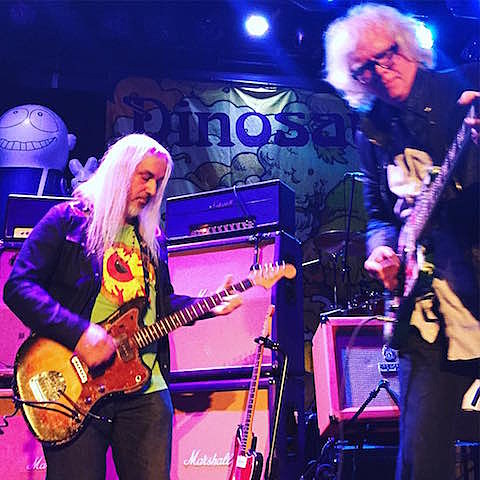 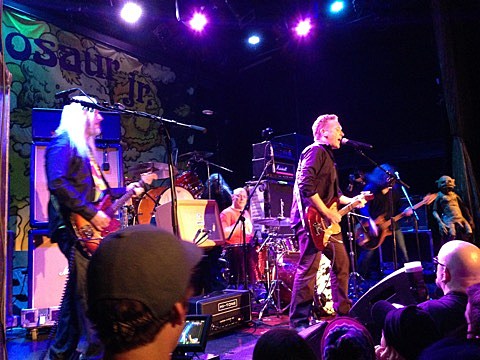 Dinosaur Jr's 30th anniversary shows at Bowery Ballroom have thus far begun and ended basically the same: Henry Rollins introduces the band from the balcony and they play their 1985 debut album, Dinosaur, in full; things end with a guest-filled, jammed-out encore of Neil Young's "Cortez the Killer." In between there are lots of surprises. Monday night (12/7) was the fifth of seven shows and while there weren't any huge names like Jeff Tweedy, Kurt Vile or Bob Mould in the evening's second set, there were a lot of guests all of whom had a very direct relationship to the band. It was kinda like Dinosaur Jr. History/Connections Night. Highlights, mostly in order and in bullet point form:

- The night opened with something called "Sitar" with J Mascis playing an electric sitar, joined by Andrew Labrecque on harmonium and chant-y vocals (he played on J's 2005 record J and Friends Sing and Chant for Amma) and Todd Barry on a mandal-type drum. "People said, 'Todd, you're not a musician," the comedian (who is actually a pretty good drummer) told the crowd. "I said 'You ain't seen nothing yet.'"

- Lee Ranaldo made his third appearance this week, singing on "Little Fury Things." I think Lee just loves Dinosaur Jr, you could tell he was having a blast and spent the rest of the set sitting on the side of the stage singing along.

- Thalia Zedek of Come/Live Skull came out to sing "Feel the Pain." Mascis noted that Thalia sang backup on the original recording (from 1994's Without a Sound). You can catch Thalia tonight (12/8) at Union Pool with 75 Dollar Bill. Similarly, Tiffany Anders (daughter of filmmaker Alison Anders and singer songwriter in her own right) came out to sing "Get Me" (she sang on the original recording from 1993's Where You Been?).

- B.A.L.L. / Gumball member (among other projects) and famed indie rock producer Don Fleming was brought out to play guitar on Green Mind's "The Wagon." Mascis told the crowd that Don had played on the original and this was the first-ever attempt to play the "single version" of the song live. It was pretty awesome. Gumball drummer Jay Spiegel was on the second kit.

- Don, Spiegel and Lee Ranaldo (on third guitar), plus some of the stage crew (one of whom on that electric sitar) were all out for "Cortez the Killer" which was indeed killer.

- Henry Rollins' introduction was entertaining. He told a story about how he and Ian MacKaye used to go see "arena rock" bands before discovering punk, telling a very funny story about going to see The Cramps (it involved the removal, folding and return of Lux Interior's pants), and how then they'd finally found "their music." He also implored people to go see (and play) more shows in the wake of the Paris terrorist attacks. Rollins also has the best seat in the house.

- Lou Barlow said he cut his left pinky the first night of the run and he can't seem to get a band-aid to stay on the whole time, and that it hurt like hell to play. Lou's Cousin It hair obscures his face for 99% of the show.

- Before one of the songs in the Dinosaur set (maybe "The Leper"), Mascis told the crowd that at the time everybody in the band was super into The Birthday Party, and they tried to sound like that but "it ended up sounding like this."

We'll have an actual set of pics from Monday's show soon. In the meantime, check out the full setlist and more Instagram photos/videos, below...