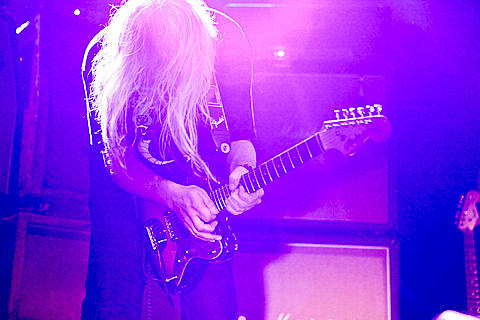 The Julie Ruin had to drop off as headliners of the 2014 Village Voice 4Knots Music Festival , as singer Kathleen Hanna has had a lyme disease relapse. (Feel better, Kathleen!) The fest has announced their new headliner: Dinosaur Jr.  They'll join Those Darlins, Speedy Ortiz, Radkey, Viet Cong, Nude Beach, Juan Wauters and more TBA at South St. Seaport on July 12. That show is free and all ages.

Dinosaur Jr. will play NYC before that, headlining the free Converse Rubber Tracks show at Music Hall of Williamsburg on May 28 with Screaming Females and Creepoid. While free, all tickets have been claimed for that one. They were also part of last night's Fun Fun Fun Fest announcement (with Blood Brothers, Judas Priest, Mineral, Failure and many more).

In other news, Dino Jr. frontman J. Mascis is guesting with the band on Late Night with Seth Meyers all this week. The show airs weeknights at 12:30 AM on NBC.