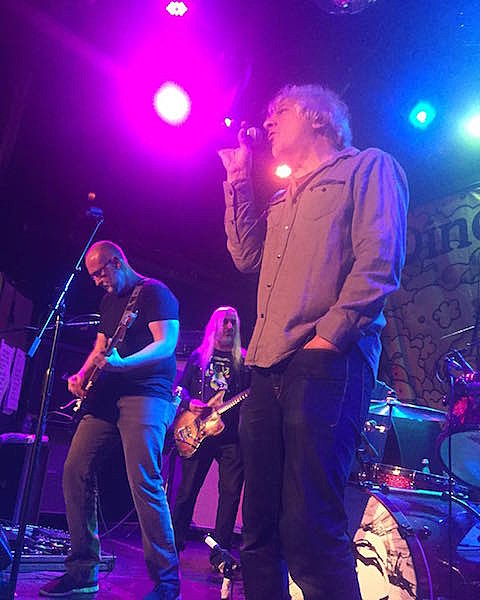 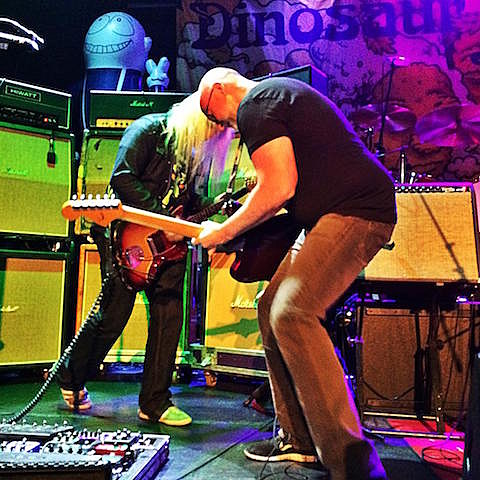 The seven-show 30th anniversary run for Dinosaur Jr. hit its midpoint on Sunday night. The biggest of Sunday's surprise guests was certainly Bob Mould who came out to play guitar on "Freak Scene" and then stuck around to play early Husker Du jammer "In a Free Land" with J Mascis moving to drums. He also stuck around for the "Cortez the Killer" encore that also featured repeat appearances by Lee Ranaldo and Fred Armisen as well as MV+EE's Matt Valentine. Ranaldo was actually the first special guest of the night, singing on "Little Fury Things," and Valentine was also one of the earlier surprise guests, coming out for "Start Choppin." Other guest vocalists on Sunday were Magik Markers' Elisa Ambrogio for "In a Jar" and Pussy Galore's Julia Cafritz for "Budge."

Three more Dinosaur Jr shows to go, tonight through Wednesday, all of which are sold out. Who could that bring out tonight? More Instagram pics and videos from Sunday night's show are below...

I didn't pick the right night to see #HenryRollins perform with #DinosaurJr but he did make an appearance to introduce them!

Bob Mould excited as fuck to be playing a guitar as usual. #dinosaurjr

A very special night at the Bowery Ballroom. Happy 30 years Dinosaur Jr! Wish I was better at taking photos- here's Bob Mould and Lee Ranaldo celebrating with Jay Lou and Murph. Thank you @champion_of_the_world and @mattmcginley cause when I need a friend it's still you 🙌🏻❤️ oh and I still can't hear 🙉 #dinosaurjr

So this Bob Mould guy showed up and murdered an entire room with Hüsker Dü with Mascis playing drums. I have to pick my brain up off the floor now. #dino30

Bob Mould with J on (hardcore) drums, doing "In A Free Land"!!! Early Hüsker Dü. I can't believe I was hearing it live. @dinosaurjr #huskerdu

Cortez the Killer. Dinosaur Jr with Bob Mould, Lee Renaldo and Fred Armisen (who was looking around while playing with the biggest smile in the room). Still not sure if this was real. Definitely sure I'm doing it again today. #dino30 #nyc