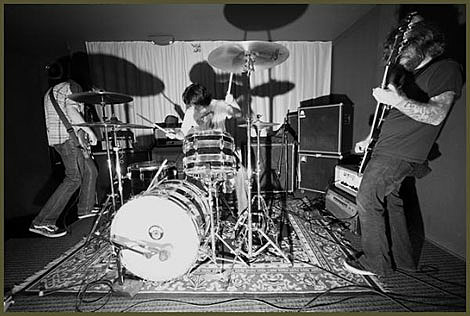 Jagjaguwar announced the addition of Dinosaur Jr. to their label family earlier this week. Not many details were released, but they said, "Its not often that the shiny reveries of our younger, more formative years get to coincide with the psyche of our professional lives. Let's call it castle building, start making plans for a new tower, muse on it in our quieter moments, then move on. WE'RE STOKED!" Other Jagjaguwar artists include Okkervil River, Bon Iver, Women, Black Mountain, and Swan Lake who just released their new album along with some free MP3's.

The Secretly Canadian/Jagjaguwar/Dead Oceans SXSW showcase takes place at Mohawk in Austin on Thursday, March 19. Mt. St. Helens Vietnam Band, Julie Doiron, Foreign Born, These Are Powers, Women, Richard Swift, Bishop Allen, Phosphorescent, BLK JKS, Akron/Family, and "Special Guests" are on that 2-stage bill. I can't say for sure who the special guest is, but Dinosaur Jr. will be at SXSW. They have a publicized SXSW show just one night later. Apparently BlackBerry (yes, the phones) have taken over the Court Street Courtyard for a couple of nights. Dinosaur Jr. are playing that. They go on after Grizzy Bear (one of two shows they're playing) who go on after Peter Bjorn and John.

Phosphorescent is playing two official shows at SXSW. They're doing a normal set at the above-mentioned showcase, and they're performing their new Willie Nelson tribute album from start to finish at the BrooklynVegan showcase at Club DeVille one night earlier which is exactly what they're doing at the Bell House in Brooklyn this Saturday night.

Lou Barlow is also playing at least one show at SXSW. The Dinosaur Jr. bassist is listed as ""Lou Barlow w/ Imaad Wasif" on the Merge/Barsuk showcase at The Parish on March 21st. Telekinesis, The Wooden Birds,, Say Hi, The Rosebuds, and Ra Ra Riot are also playing that show.

J Mascis's other band Witch is currently on tour with Earthless. That tour brings them to Music Hall of Williamsburg in Brooklyn TONIGHT (2/25). Children open up and tickets are still on sale. If you go, don't miss San Diego's Earthless.

Earthless is the brainchild of Mario Rubalcaba, Mike Eginton & Isaiah Mitchell. Rubalcaba a prolific drummer has worn the alias of Ruby Mars during his stint with Rocket From The Crypt, went on to bang away for the Hot Snakes, was the drummer for hardcore art-punks Clikatat Ikatowi and previously was in the Black Heart Procession... and prior to that? Mario was a member of Tony Alva's Alva Team skateboarding crew. He now finds himself, along with bassist Mike Eginton and guitarist Isaiah Mitchell, knee deep in the near opposite direction of all things punk rock, ensconced in the world of jam, space and "cosmic nodding" a.k.a. Earthless.

They're playing SXSW too.

Speaking of Hot Snakes, and the Bell House and SXSW, Obits kick off a tour on March 15th.

Video of Earthless performing at Roadburn 2008 (the performance they just released as a live album), below...