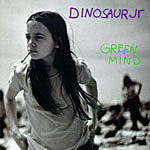 "So aside from promoting the re-release of their first three albums, why is Dinosaur Jr. back? Perhaps it has something to do with their frustration over the current state of music. "It seems like mediocrity is OK now. I just wish people would be better, or if they weren't better, that they wouldn't play," says Mascis. "It's so hip to be in a band now, it's like a fad or something, and it bums me out," explains Murph. "Because we come from a school where you try to do your best at it, and you try to put everything you have into it and make it worthwhile.""

"...if you're unable to score tickets to their sure to be sold-out show at Central Park SummerStage on July 14, don't worry—anyone within a five-mile radius should have no trouble hearing them."