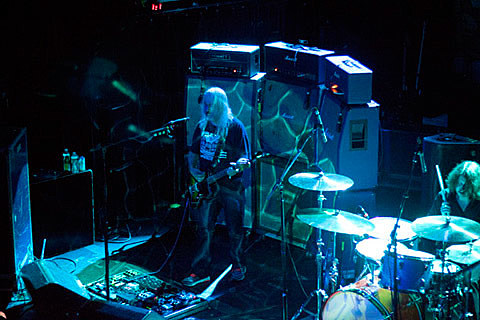 Dinosaur Jr. has been doing the festival circuit lately, having recently hit Riot Fest Chicago, Governors Ball, and they've got Mexico City's Corona Capital Fest coming up soon. (Their Culture Collide kickoff show in LA with Phoenix was postponed.) Otherwise their touring schedule is pretty light, but it's been announced that they will return to NYC to open the previously discussed MGMT show at Barclays Center (12/13). Kuroma, who used to be in MGMT, is on the bill too. Tickets for the show are on AmEx presale now and they go on sale to the general public on Friday (10/4) at 11 AM. All Dino Jr dates are listed below.

Earlier today we mentioned that Dinosaur Jr.'s 1993 album Where You Been is being covered in full by an emo supergroup that features members of Texas is the Reason, Knapsack, Samiam and more. We just premiered the cover of "Start Choppin," which features vocals from Samiam's Jason Beebout, and you can listen here.

Dino bassist Lou Barlow's other band, Sebadoh, is also touring this year, and they'll play NYC on November 1 at Bowery Ballroom with Octa#grape. Tickets for that show are still available.