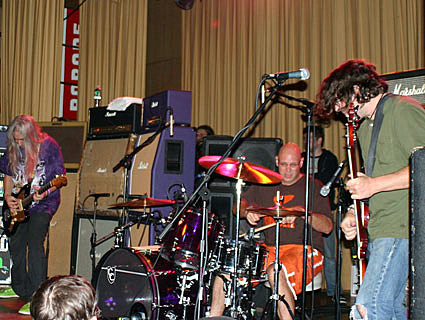 It seems like forever since we've heard one of these sad tales. J Mascis wrote...

After a blisterning set last night in Brooklyn, NY the band awoke this morning to find that the their trailer had been broken into and all of the gear has been taken.

J's Amma guitar, the mountain man guitar, Lou's Rickenbacker... EVERYTHING IS GONE. They are still taking inventory to see what else is gone but they were pretty much wiped out.

WE NEED YOUR HELP!!! Spread the word to everyone you know, every music store, pawn shop, club... anywhere you can think they may show up.

If you have ANY information let us know -Thank you.

The band is driving to Amherst to see if they can get enough gear together to play the scheduled show @ Toads in New Haven, CT but it may have to be cancelled.

And this list of the gear, and more info, is circulating via email....

"Attached and listed below is a list of gear that was stolen out of the Dinosaur Jr trailer last night (Tuesday 8.29.06) outside of their hotel in Long Island City, NY. We would appreciate spreading the word and passing this list around in hopes of recovering their gear. Please notify and alert your local guitar shops, pawn shops, music and web stores etc. to keep an eye out for this gear. Feel free to send this list to any and all band, tour and production managers, guitar freaks, touring personnel, venues, musicians and or thieves that you think could help us."

1961-3 Fender Jazzmaster SN# 62012.
-purple sparkle, black pickup covers. headstock repaired, a whole new piece of wood was glued on for the top part of the headstock under the tuners and up a 1/2” , along the whole top of the headstock. gold tuneomatic bridge, gold tuners