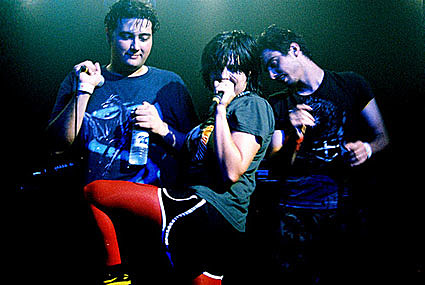 Back in July Diplo introduced us to the two new hottest hipster dance rock groups from Brazil - CSS and Bonde Do Role. Since then we've heard plenty from Sub Pop's CSS, but (relatively speaking) not so much from Diplo's Bonde Do Role. That could have something to do with the fact that CSS put on a better live show which in turn makes them more in-demand, or maybe it was Bonde Do Role's lack of a major-indie label (assuming they were just signed to a minor-indie). That of course changed when at the end of January it was announced that Bonde Do Role can now call Franz Ferdinand, The Arctic Monkeys, Archie Bronson Outfit, and Adem their label-mates - because Bonde Do Role signed to Domino Records.

Next week they return to the States. Tickets are still on sale for their March 30th show with Diplo at Studio B in Brooklyn, and they're playing at least four shows at SXSW. All dates below...

Diplo is also playing the Reading Terminal Market (where do DJ's play in there?) w/ ?uestlove on April 5th.