Cam, Jimmy, and Julez of Dipset at Hammerstein (via) 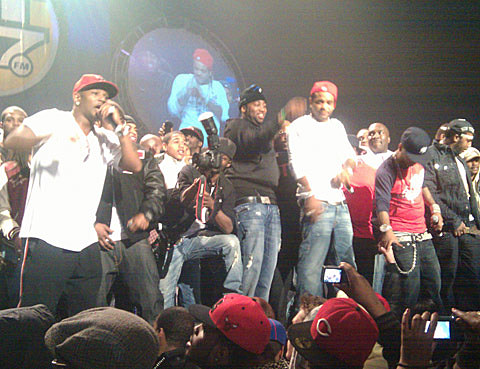 [For] ...the Diplomats -- Cam'ron, Jim Jones, Juelz Santana, Freekey Zekey -- ...this was the reunion show [for a crew]... torn asunder a few years ago by petty animus and financial accusations back and forth, survivors of arrests and family struggles, but now brought back together for another chance at harmony, if not quite world domination.

For the last decade, the Diplomats have been synonymous with Harlem -- even if some of its members have moved elsewhere. In an era in which New York is decreasingly central to hip-hop's landscape, as a group and as solo acts they have been regionalist holdouts, sticking close to the stylistically flamboyant street rap pioneered by Cam'ron and tweaked by the rest.

At almost three hours this rapturously received concert, sponsored by the hip-hop radio station Hot 97 (WQHT-FM), was a tribute to the persistent power of geographic mythology. Every summer Hot 97 hosts the giant Summer Jam concert, in which the Diplomats, local heroes infiltrating what is effectively a national stage, tend to get short shrift. This raucous night was the group's own Summer Jam, full of hits and obscurities and split into five parts: first, an opening group set; then three solo sets, by Jim Jones, then Juelz Santana, then Cam'ron; then everyone reunited to close the show. -[New York Times]

Yes, the New York Times was in attendance when The Diplomats staged their triumphant reunion at Hammerstein Ballroom on Friday, 11/26, the day after Thanksgiving. In addition to the core quartet of Jones, Santana, Zekey, and Killa Cam, Hammerstein's stage was blessed by the requisite surprise appearances from Dipset crew members Hell Rell, 40 Cal, and JR Writer in addition to an appearance from Black Rob (he of "Whoa" fame, who also appeared at the Duck Down Anniversary). The Dipset crew reportedly covered upwards of 50 songs over the evening (snippet or otherwise).

If you missed Juelz at Hammerstein on 11/26, maybe you caught him at Hammerstein.... on 11/25. Santana made a surprise appearance at the Fabolous/Nicki Minaj show alongside another not-so-surprise performer, Kanye West who "played" the Thanksgiving Parade earlier that day and a show with the help pf Nicki at Bowery Ballroom a few days earlier. Santana appeared with Fab for "Beamer, Benz, or Bentley" while West again appeared with Minaj for "Monster" from his new album.

Videos from both Hammerstein shows below...

The DIPSET Reunion Pop Champagne/ Webstar Dancin' On Me