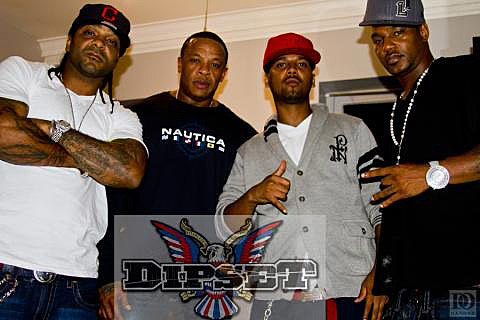 "The Diplomats, also popularly known as Dipset, are a Harlem-based hip hop group founded by Cam'ron and Jim Jones in 1997. The original members of the group were Cam'ron, Freekey Zekey, and Jim Jones ; who all grew up together in Harlem. Juelz Santana would later be added to the group in 2000." [Wiki]

Cam'ron, Juelz, and Jim Jones have killed the noise and reformed The Diplomats who are set to take off on the live stage, November 26th at Hammerstein Ballroom in NYC (tickets to the post-Thanksgiving show will cost you $63.50- $73.50).

No word if any of the other Dipset crew will be on board as well (Hell Rell, Un Kasa, Byrd Gang, J.R. Writer, 40 Cal, etc, etc). What is known is that the crew is preparing a new LP (Diplomatic Immunity 3?) and have enlisted Dr Dre for the production (as pictured above). Though no label is currently attached, the LP will reportedly hit next year and Freeky Zeeky recently insinuated that Dipset will sign with Interscope Records in the near future. No other details are known, but if you have questions you can always try and call Jim Jones at (917) 675-3685. Seriously.

More soon, but for now, you can check out an interview with Jim Jones performed in the Dipset practice space, and other videos, below.

--
FADER TV: In the Studio With Jim Jones and the Dipset Crew