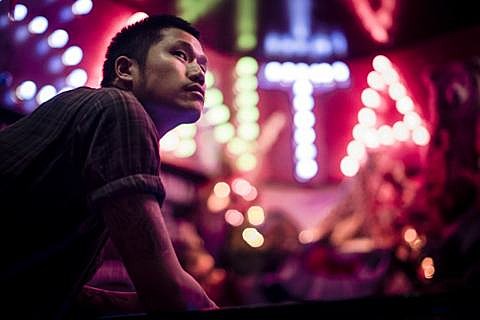 As mentioned, Dirty Beaches (aka Alex Zhang Hungtai) just released a new double album, Drifters/Love is the Devil (stream it via Spotify), and is in NYC this week for two shows. He plays a solo set at Mercury Lounge on Wednesday (6/26) where he'll focus on Drifters material, a show that also features Heathered Pearls (aka Jakub Alexander) and Xray Eyeballs (sold out). On Friday (6/28) at Glasslands he'll do a collaborative set with Heathered Pearls & Eola (Ed from TONSTARTSSBANDHT) and an opening set from Porcelain Raft. Tickets to Glasslands are still available. For more on the Glasslands show, Alex Zhang Hungtai explains:

So in essence, Glasslands show will be focusing on translating the music from LOVE IS THE DEVIL to a live audience. You might not recognize any of the songs for this night, because we will be tearing apart the songs completely into sections, reassemble them, and present this music in hopes of achieving the same potency of the emotions I caught on recording, alone at night, in Berlin, completely isolated.

You can read more on this at Dirty Beaches' blog. Meanwhile, Dirty Beaches have just announced a proper North American tour with the full band which will happen in September, including another NYC show, this time at Bowery Ballroom on 9/6. Tickets for that show go on AmEx presale on Wednesday (6/26) at noon, and they go on sale to the general public on Friday (6/28) at noon.

The September tour is with SISU, the band fronted by Dum Dum Girls drummer Sandra Vu. SISU are wrapping recording their debut album (mostly played by Vu). To tide you over, the band just made a video for "Two Thousand Hands" from this spring's Light Eyes EP. You can watch it at SPIN. West Coast and Southwest dates are also with Chasms. All dates are listed, plus the SISU video, below.