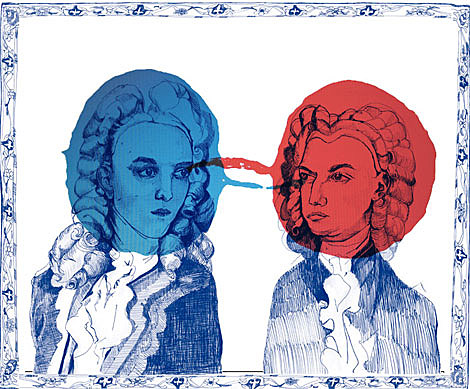 Dirty Projectors released a digital 7" of unreleased Bitte Orca session outtakes today (1/11) through Domino. The two tracks on it (previously available only on the UK-only "Temecula Sunrise" EP), "Ascending Melody" and b-side "Emblem of the World," are available as free downloads through the band's website and via the widget embedded below.

Their only currently announced NYC show is February 19th at Lincoln Center's Allen Room (as part of the American Songbook series). They're supposed to also do a short set at this year's Tibet House US benefit (at Carnegie Hall on Friday, February 26th), but they still don't appear on the lineup which now includes Gogol Bordello, Regina Spektor, and "Additional artists to be announced" in addition to Philip Glass, Baaba Maal, Patti Smith & Pierce Turner. Tickets are still on sale.

The free songs, a note from the band, and tour dates for their upcoming New Zealand/Australia tour in early March are below...

HEY:
AS OF TODAY, MONDAY JANUARY 11th, YOU CAN DOWNLOAD MP3s OF OUR ASCENDING MELODY 7" FOR FREE FROM OUR WEBSITE DIRTYPROJECTORS.NET. TWENTY RANDOM PEOPLE WHO DOWNLOAD IT WILL GET A FREE PHYSICAL COPY OF THE 7".

THESE SONGS ARE FROM THE BITTE ORCA SESSIONS. THEY ARE AWESOME BUT THEY JUST DIDN'T FIT WITH THE VIBE OF THE ALBUM. KINDA LIKE SOUL TO SQUEEZE ON BLOOD SUGAR SEX MAGIK .
LOVE,
DIRTY PROJECTORS