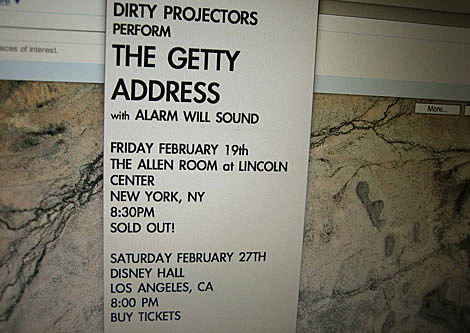 Back in 2005, an earlier iteration of the Dirty Projectors released their concept album The Getty Address, which Pitchfork's Jason Crock called "a modern opera about post-9/11 America, the destruction of our natural wilderness, the confrontation between Hernan Cortes and the Aztecs in the early 16th century, and a protagonist named after Don Henley." An ambitious album, to say the least.

Dirty Pro frontman Dave Longstreth has come a long way since that album, but he hasn't forgotten it. And at two forthcoming shows in New York and Los Angeles, the band will play the album in full, with the 15-piece ensemble Alarm Will Sound and conductor Alan Pierson helping out. They'll also play songs from last year's Bitte Orca at both shows.

The New York show will go down February 19 at Lincoln Center, as part of the American Songbook concert series. The L.A. show is scheduled for February 27 at Walt Disney Concert Hall, and the band will co-headline with the Los Angeles Philharmonic. During the first half, the Philharmonic will play orchestral pieces that Longstreth picked out. The band will take over and play the album during the second half. [Pitchfork]

The NYC show is already sold out, though tickets are still available for the one in LA. I can only imagine how much preperation needed to go into all of this (and for only two shows), so it's not a surprise that the Dirty Projectors will not be one of the artists playing the Tibet House Benefit show this year.

A letter Dave Longstreth wrote to Don Henley as well as the source of the above picture, at thegettyaddress.com. A recent free digital 7" the band released, is in a previous post.

Other upcoming DP shows include the Big Ears Fest and Coachella.

Dirty Projectors' last NYC shows took place at Music Hall of Williamsburg and Bowery Ballroom. David Byrne showed up at one of them. David Byrne more recently showed up at St Vincent's show just this past Friday night at The Allen Room which is the same location and part of the same 'American Songbook' series that the Dirty Projectors are playing on February 19th. All dates and two Getty Address videos below.. 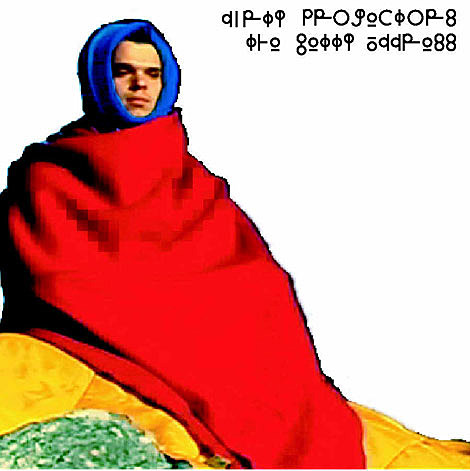