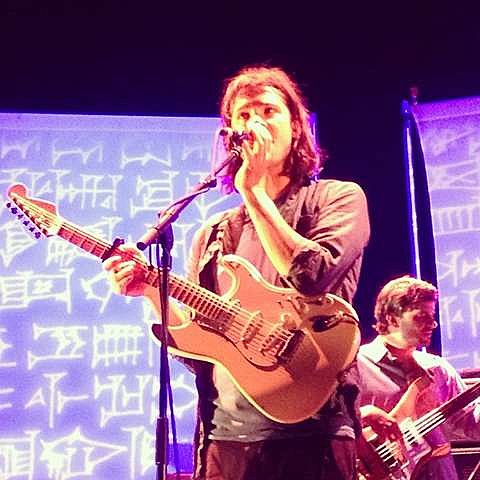 There were a couple guys in the crowd that were yelling in-between songs "Let's Go! Wooooo!" If this was a reference to a song, frontman Dave Longstreth didn't seem to get it. "Where you want to go?" he asked politely. After more incoherent woooooing, Dave reassured the crowd, "We're going there, man."

And go there, they did. Dave and the band performed most of Swing Lo Magellan just as meticulously arranged and produced as the album is--it happens to be their most accessible to date and translates very well live. [Noisey]

Dirty Projectors have been on the road since the release of their new album, Swing Lo Magellan, and after having already played NYC twice over the summer, they returned for another area show at the newly reopened Capitol Theatre in Port Chester on Tuesday (9/25) with Lavender Diamond (who also played Mercury Lounge the next night [9/26] and will play Glasslands on Sunday [9/29] with Helado Negro). A video of the DPs playing "Wittenberg IV" at the Capitol Theatre show and their setlist is below. Their tour brings them back to NYC for a show at Carnegie Hall on January 11 with yMusic. Tickets for that show are still available.

Capitol Theatre shows continue with David Gray and Foy Vance tonight (9/27). On Friday (9/28), The Roots were scheduled to continue their residency with a show with Talib Kweli, but as they did with their Septembr 14 show, they've cancelled this Friday's show too. In place of that gig, Roots drummer Questlove, Talib Kweli, and Q-Tip will DJ the first-ever "Soul Planetarium" night at the Cap instead. "Having Questlove, Talib, and Q-Tip spin on the same bill would be awesome in a small dark closet," says [Capitol Theatre booker] Peter Shapiro, who helmed the theatre's relaunch this year and produced 'U2 3D,' the first-ever live action film in the digital 3D format. "Having them each spin Friday night in a legendary rock palace-meets-next generation Planetarium should blow minds." Tickets for that show are available.

Q-Tip does his next Offline Party at Irving Plaza on October 19. Tickets for that show are on sale now.

Dirty Projectors video and setlist are below. 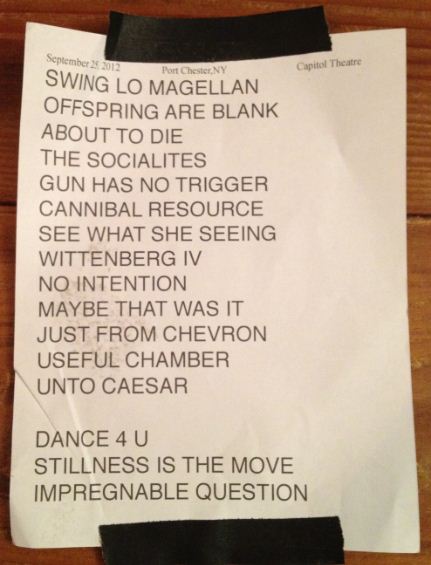