Dirty Projectors in Brooklyn in 2012 (more by Greg Cristman) 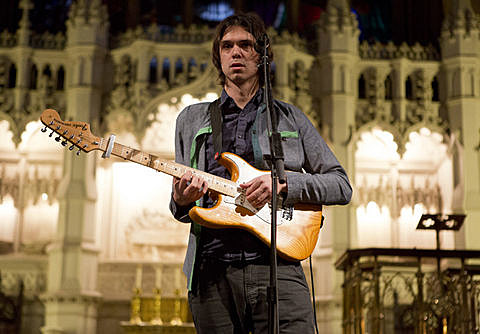 As mentioned, Dirty Projectors are playing Carnegie Hall on January 11 as part of the Wordless Music Series (the same series that is presenting the just-announced Liars show at the Met). You already knew that contemporary classical orchestra yMusic would be opening the show and joining Dirty Projectors on stage during their set, but it's recently been revealed that there will be a very special guest. Any guesses on who the guest will be? Tickets for the show are still available.

Dirty Projects will also be pressing a 7" of Swing Lo Magellan track, "Offspring Are Blank" on white vinyl with the previously unreleased track, "There's A Fire" on the flip. That 7" will be available exclusively at the Carnegie Hall show, and it's a limited edition pressing of 250 copies.

The video for "Offspring Are Blank" is below...