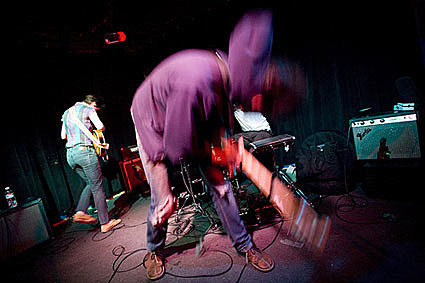 Throughout the set, Longstreth's seemingly improvised intros reminded me of Captain Beefheart's deliberate but dissonant explorations of delta-blues guitar rhythms. But with a progressive-punk sensibility. When combined with sparse but potent drum fills and splashes, and the girls' interwoven harmonies, the songs had an almost gospel-like tinge to them. It was as if they should have been playing at an AA meeting in a Cathedral. Nonetheless they held the Cat's audience spiritually captive for their hour-plus long set. Following some real barn-burners and foot-stompers, I couldn't help but jot to myself: "This guy wails!" And he did. And so did my Monday night (April 7). [BrightestYoungThings]

I went to the show last night at Music Hall of Williamsburg (Wednesday, April 9, 2008). There's nothing to say I haven't said before (I think I said that before though). I loved every second of it. They played some new songs. More tour dates below....