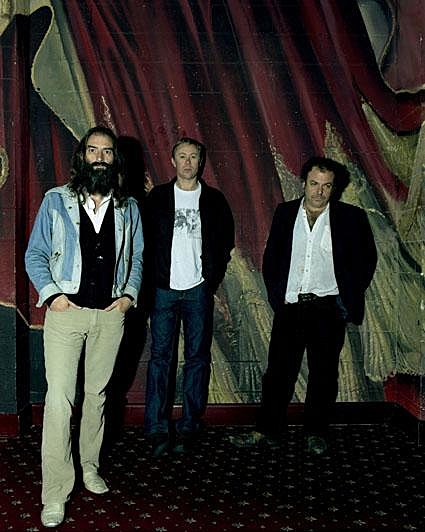 Ellis since 1996 has been a member of Nick Cave and the Bad Seeds. Ellis and Turner have both released solo albums. In addition, Turner and White have released several EPs as The Tren Brothers, and appear as backing musicians on albums by Cat Power, Bonnie 'Prince' Billy and PJ Harvey (White drums). Turner is also an internationally exhibited painter with his own work gracing the covers of all of their major albums except Sad & Dangerous. He also runs the band's own record label Anchor & Hope. In 1999, Dirty Three with Low recorded an In the Fishtank session for Konkurrent records.

Australia's Dirty Three (Warren Ellis on violin, Mick Turner on electric guitar, Jim White on drums) will be playing a handful of U.S. shows in September. That includes one on Sunday, September 13th at the Bowery Ballroom in NYC. Tickets go on presale Wednesday, June 17th at noon. General sale starts Friday, June 19th at noon.

The NYC gig comes two days after the group's appearence at ATP NY, where they'll perform their album Ocean Songs in full. Also at that festival are the reunited Jesus Lizard who also just announced a NYC show or two of their own.

All tour dates, below...