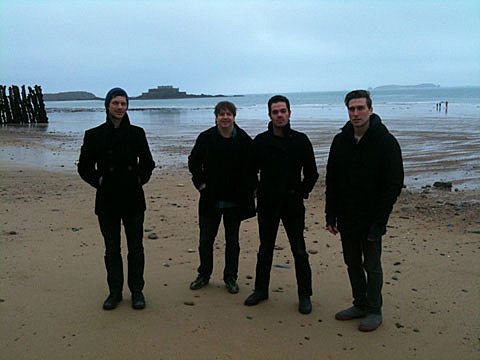 Disappears combine psychedelia, punk, and reverb-soaked krautrock. The Chicago band, whose drummer is now Steve Shelley as you can see in the new band photo above (whether that is long term or not remains to be seen), will hop the pond in May for a set of European dates before heading back to the US to play a string of dates in late July and August. The Psychic Paramount and Obits will hop on the bill for different legs of the tour, and NYC will gets two shows, both with The Psychic Paramount: July 26th at Union Pool and July 27th at Cake Shop. All dates are listed below.

Obits, whose dates with Disappears are on the west cost, played Union Pool last night (4/20) as part of a memorial for Brendan of Orphan. They also played Record Store Day 2011 at Generation Records.

Steve is also a member of Spectre Folk who play 285 Kent with Woods on April 28th.

All tour dates and some videos, below....