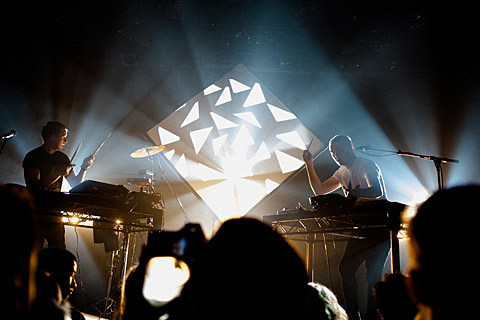 Yesterday (4/22), Summerstage announced its 2013 season. But one of the shows that was not on that announcement and was just revealed today is a co-headlining double bill by dance duos Disclosure and TNGHT at Central Park Summerstage on August 6 with support from Julio Bashmore. The show starts at 6 PM so the only downside of this is that it might not be dark yet during Disclosure or TNGHT's set depending on which one goes first. But that aside, this is going to be one of wildest Summerstage shows of the summer. Tickets go on sale Friday (4/26) at noon. The show happens right after Disclosure plays Lollapalooza. TNGHT doesn't play that festival, but they do play a different Chicago festival in July, Pitchfork.

Disclosure recently announced that their debut album, Settle, will be out June 3 via PMR. It features previously released singles, "White Noise" (feat. AlunaGeorge) and "Latch" (feat. Sam Smith), in addition to the just-released track, "You & Me" (feat. Eliza Doolittle). If you didn't hear that one yet, it's just as awesome as their previous tracks and ups the excitement even more for that album to drop. Check it out below.

TNGHT also slightly less recently revealed a new track in support of their tour which just hit Coachella twice and NYC once. The track is called "Acrylics" and it's even more of a banger than anything on last year's self titled EP. Stream that one below as well.

All dates for both Disclosure and TNGHT are listed, along with both song streams, below...

Disclosure - "You & Me" (feat. Eliza Doolittle)