Dispirit at Rites of Darkness (more by BBG) 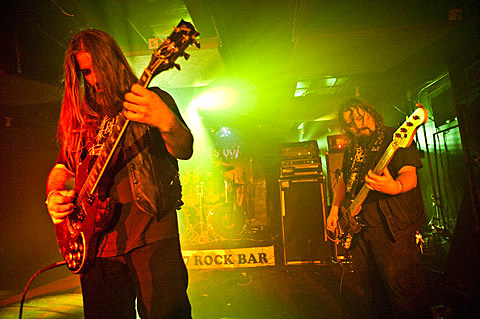 As discussed, I am currently in San Antonio, TX at Rites of Darkness preparing to see the likes of Zemial, Mournful Congregation, Midnight, Inquisition, Weapon, Demigod, and many more. Stay tuned to BV for pictures and daily reports from the festival. I will ALSO be live-tweeting the festival at my twitter as well.

After almost 30 years in existence, Onslaught have announced their first ever US tour, including a stop at Saint Vitus on April 7th. Support will come from M-Pire of Evil (mems Venom). Full tour schedule is below. THe band will reportedly be performing "an exclusive set list spanning through all their studio albums such as: Power From Hell, The Force, In Search Of Sanity, Killing Peace and their latest release Sounds Of Violence."

As we wind down for the year-end, Natur will present a holday gift to NYCers. Look for the recently-Earache-signed band to play a FREE show on 12/10 (Saturday) at Saint Vitus with La Otracina, Syphilitic Lust, and Ain't Rights. You must be 21+ to get in.

More suggested shows and some live video of Brainoil and Spazz (not together), below....