Singer-songwriter Nicole Atkins's long in the works new album Goodnight Rhonda Lee will be released by Florence, AL-based indie label Single Lock Records on July 21st (you can pre-order now). She's been recording the songs with the producers that worked with Leon Bridges, with additional mixing by Ben Tanner who worked with the Alabama Shakes. Her new label boss recently discussed his excitement over signing Nicole:

"Nicole's reputation speaks for itself, but we believe this record sets the stage for even bigger things in an already remarkable career," says Single Lock label manager Reed Watson. "Nicole is a talented artist who is just finding her voice and we are excited about her future. The fact that a New Jersey girl fits so well in our Muscle Shoals home reminds us that the world is a lot bigger than our little corner. We're proud to have her on board at Single Lock Records."

Like Leon Bridges, her new album is a vintage soul one, as you can hear in new songs released so far. First was "A Little Crazy", a song that you may have heard in Cameron Crowe's 2016 Showtime series, Roadies. and which premiered here on BrooklynVegan. More recently she put out the album's title track and a video for "Listen Up" which premiered at NPR. You can watch/listen to both, and check out the album's full track list and upcoming tour dates, at the end of this post. 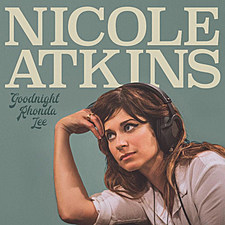 For the third edition of 'Dive Bar Wisdom' we talked to Nicole Atkins to talk about her influences, her grandparents, and some of her favorite places to go in NYC...

BV: What were some of your musical influences for the new album?

Were your grandparents (or a grandparent-like figure in your life) music fans or even musicians? Did any of the music they liked or played influence your own musical taste or style of music?

Yes both my grandparents loved music. My grandmother loved old country singers like Roy Orbison and Dolly Parton and that's what we would listen to together. She also loved Franki Valli, who I adore. My grandfather, who is from Sicily, loved Frank Sinatra and Louie Prima, although when he gets drunk he never stops talking about how much Louie Prima sucks at baseball. It's almost like a tick.

What is some worldly advice that a grandparent gave you that's stuck with you? How has that influenced how you think about life or music?

My grandfather kinda talks like an old jazz cat. "You're a piece of work kid." "Ah so" "Play it cool kid" I try to take his advice to play it cool in my music and in life. Just hangin out on the planet trying not to be a spazz.

What is your favorite place to see or play live music in NYC?

It used to be Zebulon (RIP) but over all the Bowery Ballroom has always been my favorite place to watch and play shows in the city. Sounds great, you can see well from everywhere and it's just plain cozy. Homey. I also really loved playing Celebrate Brooklyn in Prospect Park when we opened up for Nick Cave and the Bad Seeds. It was a perfect sunny day and great to walk around and crash a BBQ or two after our set.

What is your favorite Brooklyn dive bar and why?

I really love the Soft Spot on Bedford in Williamsburg. It's been there forever. No frills. Kate and Matt the owners are the shit. They have a little dice game you can play at the bar that no one ever wins and in the summers they have free burgers and dogs. You just tip the grill guy. It's no bullshit and if my grandfather would get out of Jersey it's where I'd take him for the day.

Soft Spot, pictured above, is at 128 Bedford Avenue at North 10th in Brooklyn, NY.

Catch Nicole Atkins, who just toured with the Old 97's, on tour this summer, Mountain Jam and Newport Folk Fest included. All dates are listed below.

Goodnight Rhonda Lee Track Listing:
1. A Little Crazy
2. Darkness Falls So Quiet
3. Listen Up
4. Goodnight Rhonda Lee
5. If I Could
6. Colors
7. Brokedown Luck
8. I Love Living Here (Even When I Don't)
9. Sleepwalking
10. A Night of Serious Drinking
11. A Dream Without Pain
---