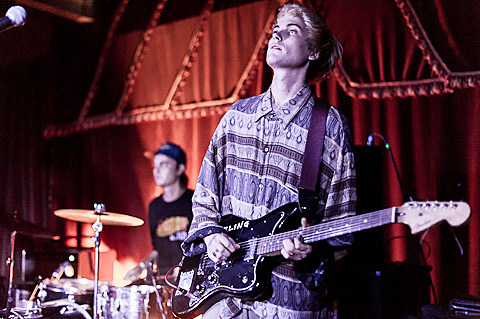 While currently busy out on the road supporting Frankie Rose, Dive have changed their name to DIIV. While Allmusic.com lists about 10 artists with the name Dive, Cole Smith tells Pitchfork that the spelling change comes specifically "out of respect" to the Dive that was the pseudonymn of German industrial musician Dirk Ivens. "A name is nothing," Smith told Pitchfork. "I don't really give a fuck what the band is called. I originated this project in a bedroom with no internet and didn't know it would ever leave." Whether the rest of his apartment or his phone had the internet and access to Google.com is undetermined at this time.

DIIV's tour with Frankie Rose, recently hit the Mohawk in Austin and wraps up this Saturday (5/5) with a sold-out at Mercury Lounge that also features Scotland's Spectrals and ex-Team Robespierre duo Black Marble. The band's debut album, Oshin, is out June 26 and you can stream a new song from it, "Doused," at the bottom of this post. DIIV (who played our Hotel Vegan parties during SXSW this year) will headline a record release show at Glasslands on June 23 and tickets are on sale now.

After the record release show, DIIV's only other scheduled show is opening for Grimes and Wild Nothing at Hudson River Rocks on August 9 (DIIV was just added to that bill). Click though for all DIIV tour dates and the stream of "Doused."..